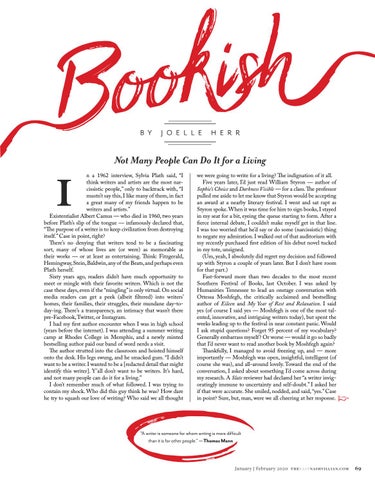 Not Many People Can Do It for a Living

n a 1962 interview, Sylvia Plath said, “I think writers and artists are the most narcissistic people,” only to backtrack with, “I mustn’t say this, I like many of them, in fact a great many of my friends happen to be writers and artists.” Existentialist Albert Camus — who died in 1960, two years before Plath’s slip of the tongue — infamously declared that, “The purpose of a writer is to keep civilization from destroying itself.” Case in point, right? There’s no denying that writers tend to be a fascinating sort, many of whose lives are (or were) as memorable as their works — or at least as entertaining. Think: Fitzgerald, Hemingway, Stein, Baldwin, any of the Beats, and perhaps even Plath herself. Sixty years ago, readers didn’t have much opportunity to meet or mingle with their favorite writers. Which is not the case these days, even if the “mingling” is only virtual. On social media readers can get a peek (albeit filtered) into writers’ homes, their families, their struggles, their mundane day-today-ing. There’s a transparency, an intimacy that wasn’t there pre-Facebook, Twitter, or Instagram. I had my first author encounter when I was in high school (years before the internet). I was attending a summer writing camp at Rhodes College in Memphis, and a newly minted bestselling author paid our band of word nerds a visit. The author strutted into the classroom and hoisted himself onto the desk. His legs swung, and he smacked gum. “I didn’t want to be a writer. I wanted to be a [redacted detail that might identify this writer]. Y’all don’t want to be writers. It’s hard, and not many people can do it for a living.” I don’t remember much of what followed. I was trying to contain my shock. Who did this guy think he was? How dare he try to squash our love of writing? Who said we all thought

we were going to write for a living? The indignation of it all. Five years later, I’d just read William Styron — author of Sophie’s Choice and Darkness Visible — for a class. The professor pulled me aside to let me know that Styron would be accepting an award at a nearby literary festival. I went and sat rapt as Styron spoke. When it was time for him to sign books, I stayed in my seat for a bit, eyeing the queue starting to form. After a fierce internal debate, I couldn’t make myself get in that line. I was too worried that he’d say or do some (narcissistic) thing to negate my admiration. I walked out of that auditorium with my recently purchased first edition of his debut novel tucked in my tote, unsigned. (Um, yeah, I absolutely did regret my decision and followed up with Styron a couple of years later. But I don’t have room for that part.) Fast-forward more than two decades to the most recent Southern Festival of Books, last October. I was asked by Humanities Tennessee to lead an onstage conversation with Ottessa Moshfegh, the critically acclaimed and bestselling author of Eileen and My Year of Rest and Relaxation. I said yes (of course I said yes — Moshfegh is one of the most talented, innovative, and intriguing writers today), but spent the weeks leading up to the festival in near constant panic. Would I ask stupid questions? Forget 95 percent of my vocabulary? Generally embarrass myself ? Or worse — would it go so badly that I’d never want to read another book by Moshfegh again? Thankfully, I managed to avoid freezing up, and — more importantly — Moshfegh was open, insightful, intelligent (of course she was), and all-around lovely. Toward the end of the conversation, I asked about something I’d come across during my research. A Slate reviewer had declared her “a writer invigoratingly immune to uncertainty and self-doubt.” I asked her if that were accurate. She smiled, nodded, and said, “yes.” Case in point? Sure, but, man, were we all cheering at her response.

“A writer is someone for whom writing is more difficult than it is for other people.” — Thomas Mann 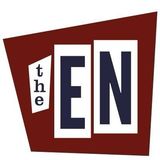