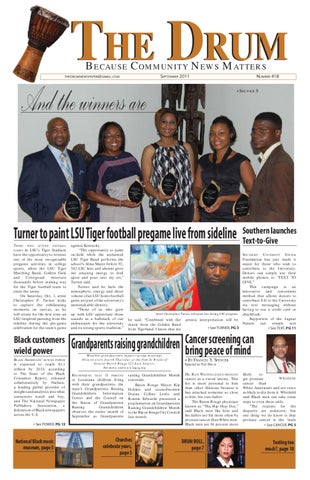 THE DRUM BECAUSE COMMUNITY NEWS MATTERS

And the winners are

in LSU’s Tiger Stadium have the opportunity to witness one of the most recognizable pregame activities in college sports, when the LSU Tiger Marching Band, Golden Girls and Colorguard entertain thousands before making way for the Tiger football team to enter the arena. On Saturday, Oct. 1, artist Christopher P. Turner looks to capture the exhilarating moments on canvas, as he will create for the first time an LSU-inspired painting from the sideline during the pre-game celebration for the team’s game

against Kentucky. “The opportunity to paint on-field while the acclaimed LSU Tiger Band performs the school’s Alma Mater before 92, 542 LSU fans and alumni gives me amazing energy to feed upon and pour into my art,” Turner said. Turner said he feels the atmosphere, energy and sheer volume of an LSU home football game are part of the university’s unmistakable identity. “Those of us who grew up with LSU appreciate those sounds as a hallmark of our enthusiasm for the university and its strong sports tradition,”

BLACK AMERICANS’ BUYING POWER is expected to reach $1.1 trillion by 2015, according to The State of the Black Consumer Report, released collaboratively by Nielsen, a leading global provider of insights and analytics into what consumers watch and buy, and The National Newspaper Publishers Association, a federation of Black newspapers across the U.S.

SOUTHERN UNIVERSITY SYSTEM Foundation has just made it easier for those who wish to contribute to the University. Donors can simply use their mobile phones to “TEXT TO GIVE.” This campaign is an innovative and convenient method that allows donors to contribute $10 to the University via text messaging without having to use a credit card or Artist Christopher Turner will paint live during LSU pregame. checkbook. Supporters of the Jaguar he said. “Combined with the artistic interpretation will be Nation can simply text music from the Golden Band » See TURNER, PG 3 » See TEXT, PG 11 from Tigerland, I know that my

Special to THE DRUM

DR. RANI WHITFIELD SEES PROSTATE cancer as a sworn enemy. This foe is more personal to him than other illnesses because it has attacked someone so close to him: his own father. The Baton Rouge physician known as “Tha Hip Hop Doc,” said Black men like him and his father are hit more often by prostate cancer than White men. Black men are 56 percent more

likely to Whitfield get prostate cancer than White Americans and are twice as likely to die from it. Whitfield said Black men can take extra steps to even these odds. “The reasons for the disparity are unknown, but one thing we do know is that prostate cancer is the ‘male » See CANCER, PG 5 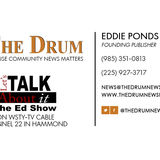