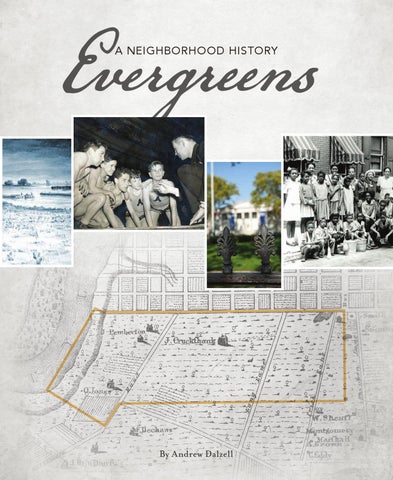 This project has been funded in part by a grant from the Preservation Alliance for Greater Philadelphia. Also funded by: The Claneil Foundation The Philadelphia Foundation The South of South Neighborhood Association Copyright ÂŠ 2013 The South of South Neighborhood Association (SOSNA), Andrew Dalzell ISBN: 978-0-9892788-0-5 Book Design: Barbara Karp, Karp Graphic Design

Chapter 3 The Founding of the Thirtieth Ward and Maturation of the Neighborhood: 1862-1917

An Inventory of the Neighborhoodâ&amp;#x20AC;&amp;#x2122;s Historical Structures

The Lenne Lenape Native Americans (later known as the Delaware Indians) referred to South Philadelphia as “Wicaco,” meaning “pleasant place at the pine tree camp.” The Dutch made the first incursion into Wicaco in 1633, buying a large area of land along the Schuylkill River. “Schuylkill” means “hidden river” in Dutch, and it was named as such because its confluence with the Delaware River was so inconspicuous to Dutch explorers. The Swedish arrived five years later, with both commercial and imperial ambitions. Settling on the western banks of the Delaware, their commercial focus was on fur and tobacco. Swedish traders were in consistent competition with their Dutch and British counterparts. Though the Dutch, led by Peter Stuyvesant, established colonial control over much of the region in 1655, the Swedes remained in South Philadelphia into William Penn’s time.

By the last quarter of the seventeenth century, there were roughly 2,000 Europeans along the Delaware River, as well as some African slaves brought by the Swedes and the Dutch. Slaves preceded William Penn in the region by fifty years. Arriving in 1682, Penn and his surveyor, Thomas Holme, outlined the city’s grid to extend two miles east-to-west, and one mile north-to-south at the narrowest point between the Schuylkill and Delaware Rivers. In doing so, they set South Street (then Cedar Street) as the northern boundary of the current neighborhood, and established its lasting identity as being close to, but never part of, Center City. Three counties constituted Penn’s lands: Bucks, Montgomery, and Philadelphia. The City of Philadelphia was formally established in 1701, and by 1712 the rest of Philadelphia County was subdivided into eleven other jurisdictions, known as townships. The western portion of what is now the neighborhood, roughly west of Sixteenth Street, was in Passyunk Township, and the eastern sliver was in Moyamensing Township. In the Lenape language, Passyunk meant “in the valley” and Moyamensing meant “pigeon droppings.”

Penn designated the areas of Passyunk and Moyamensing to be country estates and farms for the colony’s first investors. Penn and Holme always intended the area south of South Street to be rural as part of Penn’s “Greene Countrie Towne” concept. It was the custom to buy a lot within Philadelphia’s city limits and a country estate as well. Israel Pemberton, for example, from 1738 owned an estate at Twenty-Third and South Streets, by Grays Ferry Road, but lived primarily at the southwest corner of Front and

Evergreens: A Neighborhood history Figure 4 “A Plan of the City and Environs of Philadelphia.” General William Howe, 1777

Market Streets. Penn imagined that the city would develop west towards the Schuylkill River with wealthy farms and estates surrounding it. The symmetry of Penn’s designs was quickly compromised by the realities of life in the New World. The hub of activity was the Delaware waterfront, so people naturally wanted to live nearby. Philadelphia grew in a crescent hugging the Delaware River. Within the city, the neat rectangular lots were subdivided into smaller lots, and an intricate system of alleys also emerged. Just outside the city limits and the grid plan, development was less orderly, but nonetheless roughly incorporated the grid concept.

In the first half of the eighteenth century, a wealthy Quaker oligarchy governed Philadelphia. Devout and learned, these men, including Israel Pemberton and his sons, established strict moral codes aimed at preserving the public order. In colonial Philadelphia County, the wealthiest ten percent of taxpayers owned nearly ninety percent of taxable land, and for them social standing was reflected in proximity to the city’s center. Those families living just south of South Street, especially the Pembertons, were at the apex of social standing and power. The physical landscape of the future neighborhood changed little in the buildup to the Revolutionary War. In the winter of 1777, British General William Howe occupied Philadelphia and its environs, while George Washington and his troops famously hunkered down at Valley Forge. With Howe’s invasion imminent, many fled the city. Those who stayed, especially pacifist Quakers, were branded as either cowards or conspirators. The three

Pemberton brothers – Israel, James and John – refused to utter an oath of allegiance to the state of Pennsylvania, and were summarily exiled to Virginia (see sidebar at right). General Howe and his men severely altered the physical landscape of the area by clearing many of its once numerous trees. (To the natives, Philadelphia was known as Coaquannock, meaning “grove of tall pines.”) The General also made a map of the city and its suburbs (seen at the top of page 8) published in London in 1779, which clearly illustrates the scope of Philadelphia’s physical growth, and the lack thereof in western Moyamensing and Passyunk townships. What remains today from the colonial period is Grays Ferry Road. This well-worn Lenape track led to the Schuylkill River and, from 1696, a ferry that shuttled people across. The Gray family took control of that ferry around 1750, hence the street’s present name. During their occupation of the region the British replaced the ferry with a floating bridge — logs of wood placed sideby-side with planks nailed across them. This bridge was swept away in 1789 but was quickly replaced. Grays Ferry Road and later Grays Ferry Bridge was the main southerly gateway into and out of the City of Philadelphia. The road from the ferry channeled many through the heart of the current neighborhood, including George Washington. When he crossed at Grays Ferry as President-elect in 1789, the brothers Gray constructed him a triumphal arch, and “every fence, field, and avenue was thronged with people.”

The Pemberton Family The Pembertons were originally from Lancashire, England. Phineas Pemberton (1650-1702) sailed to the New World with his wife and elderly father on July 5, 1682. A dear friend of William Penn’s, he purchased 500 acres on the Delaware River in Bucks County, and Phineas himself was the County’s first citizen. Establishing the family homestead at Grove Place, he erected Bolton Farm and immersed himself in County politics, serving as speaker of the Provincial Assembly among other duties. Upon Phineas’s death, William Penn said that, “Without him this is a poor country indeed.” Phineas’s only surviving son, Israel Pemberton (1684-1754) was born at Grove Place and moved to Philadelphia, where he was first employed in the counting house of the pre-eminent merchant, Samuel Carpenter. Israel became one of the wealthiest and best-known merchants in the City, and rose to the top of the Quaker oligarchy. Israel was a devout Quaker, and very active in the Society of Friends. From 1714 to 1745, his city residence was at Front and Market Streets. As of 1738 he also owned a large estate at what is now Twenty-Third Street, South Street and Grays Ferry Road, known as “Evergreens.” Israel’s eldest surviving son, also named Israel I Pemberton (1715-1779), was known as the “King of Quakers.” Israel I was an extremely successful merchant, possessing both great wealth and great power. Like his father, he served in regional politics and the Society of Friends. He also earned himself the nickname of “King Wampum” because of his sympathies for the local indigenous population. This compassion for the natives led to his resignation from the Provincial Assembly, on which he served intermittently, in 1756, when war was declared on the Delaware Indians. Towards the end of his life he continued to exhibit defiance and conviction as he and his two brothers refused to take up arms against the British because as Quakers they were pacifists. Declining therefore to take an oath of allegiance to Pennsylvania the Pemberton brothers were exiled to Winchester, Virginia, where Israel I died in 1779. The Evergreens estate at Twenty-Third Street and Grays Ferry Road passed to Israel’s second eldest surviving son, James Pemberton (1723-1809). A well-traveled merchant like his father and brother, James used his wealth and prestige for various philanthropic ends. He was a founder and member of Pennsylvania Hospital, and of the Pennsylvania Abolition Society. His famous letters during the Revolution articulate Quaker attitudes towards war, government and authority. Along with his brothers, James would be exiled to Virginia during the British occupation of Philadelphia. He inherited not only Evergreens, but also Bolton Farm, the family estate in Bucks County. Israel I’s third surviving son, John Pemberton (1727-1795), was a Quaker missionary. His inheritance allowed him to preach extensively throughout Europe. Also exiled to Virginia, he died on a mission to Holland and Germany.

Figure 6 “A Plan of the Township of Moyamensing and Passyunk.” Charles de Kraaft, 1790 Source: Map Collection, Free Library of Philadelphia.

In 1776 much of the neighborhood remained undeveloped farmland. Philadelphia’s densely populated area stretched west only as far as Seventh Street. Estates for wealthy families such as the Pembertons, Grays, and others dotted the fields, farms, and marshes of Passyunk and

western Moyamensing Townships. The banks of the Schuylkill River were quiet compared to the bustling Delaware riverfront. But gradually the area became more active, its boundaries more rigid, and its identity unique.

Note II: In the earliest years of Philadelphia, this neighborhood was not part of the city proper. Parts west of what is now roughly Seventeenth Street were in Passyunk Township, those between Seventeenth Street and where Broad Street is now, resided in Moyamensing Township. When the city was consolidated in 1854, it was part of the 1st Ward, and in 1870 part of the 26th Ward. Sources: 1880-1930: Population of Metropolitan Area Counties: 1790-1960. Population of Philadelphia Sections and Wards 1860-1960. Philadelphia City Planning Commission, December 1963. 1940-2000: Population and Housing Statistics for Census Tracts, Philadelphia PA. Washington, DC: United States Government Printing Office. 2010:

“We had it great at the [Grays Road] playground. There was woodshop for the boys taught by Mr. Collins and cooking classes for the girls taught by Miss Timms. In the winter, we would watch movies by the huge walk-in fireplace and every Friday night there was a dance called Socials. We weren’t allowed to wear dungarees, we had to wear our Sunday clothes.” Interview with Devil’s Pocket resident, December 1, 2012.

A preview of Evergreens: A Neighborhood History, by Andrew Dalzell and published by the South of South Neighborhood Assn (SOSNA) in South Philly. Neighborhood is South to Washington Avenue, Broad Street to the Schuylkill River.