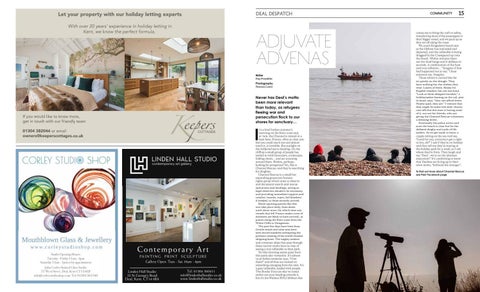 Never has Deal’s motto been more relevant than today, as refugees fleeing war and persecution flock to our shores for sanctuary…

t’s a brief Indian summer’s morning on the Kent coast and, at 7am, the Channel is misted in a heat haze. France, often so clear you feel you could reach out and almost touch it, is invisible. But sunlight on the millpond sea is dazzling. On the clifftop a small group of people has settled in with binoculars, a telescope, folding chairs… and are scanning around them. Birders, perhaps, looking for peregrines? No, this is Channel Rescue, and they’re searching for dinghies. Channel Rescue is a small but expanding grassroots human rights group which aims to observe and document search-and-rescue operations and landings, acting as legal observers should it be necessary, and providing immediate support and comfort (snacks, water, foil blankets) if needed, to those recently arrived. Shore-spotting patrols like this one take place daily, from dawn until about noon (by which time any vessels that left France under cover of darkness are likely to have arrived), at points along the Kent coast from the White Cliffs to Dungeness. The past few days have been busy. Gentle winds and calm seas have seen record numbers attempting the perilous crossing of the world’s busiest shipping lanes. The mighty tankers and container ships that pass through these narrow straits have no way of seeing a tiny inflatable in their path. Yet this morning seems quiet from this particular viewpoint. It’s almost 10:30 before someone says, “Over there!” and all bins are trained on something emerging from the mist. It’s a grey inflatable, loaded with people. Two Border Force jet-skis we noted earlier are soon heading towards it, but it’s the Walmer RNLI lifeboat that

comes out to bring the craft to safety, transferring most of the passengers to their bigger vessel, and we pack up as they set off along the coast. We reach Kingsdown beach just as the lifeboat has unloaded and departed, and the inflatable is being dragged by the Coastguard up onto the beach. Within minutes there are two loud bangs and it deflates in seconds. A combination of the heat and over-inflation… “Imagine if that had happened out at sea,” I hear someone say. Imagine. Those whom it carried this far sit quietly on the shingle. They have nothing but the clothes they wear. Layers of them. Ready for English weather, but not this kind. “Look at them designer hoodies,” a holidaymaker leaning on the rail, pint in hand, says, “they can afford them. Ninety quid, they are.” I venture that they might be some rich kids’ charity cast-offs but this man is having none of it, nor are his friends, who are giving the Channel Rescue volunteers a dressing-down. Eventually the police arrive and soon the beach is clear but for the deflated dinghy and a pile of life jackets. As we get ready to leave, a couple sitting on the sea wall say, “Good for you, everyone’s got a right to live, eh?” I ask if they’re on holiday and they tell me they’re staying at the holiday park for a week, so I ask where they’re from. They laugh and say “Deal – we’re on the ultimate staycation!” It’s comforting to know that Dealites are living up to their town motto, “befriend the stranger”. To find out more about Channel Rescue see their Facebook page

A tri-annual magazine about Deal 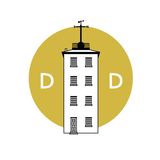