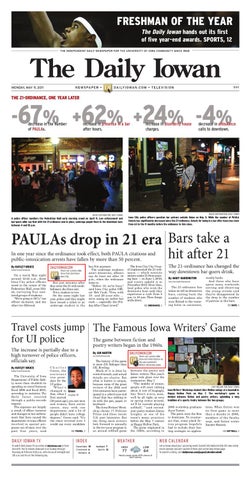 FRESHMAN OF THE YEAR The Daily Iowan hands out its first of five year-end awards. SPORTS, 12

THE 21-ORDINANCE, ONE YEAR LATER

increase in presence in a bar after hours.

decrease in ambulance calls to downtown.

A police officer monitors the Pedestrian Mall early morning crowd on April 11. Law enforcement and bar-goers alike say that with the 21 ordinance now in place, underage people flock to the downtown bars between 4 and 10 p.m.

Iowa City police officers question bar patrons outside Union on May 5. While the number of PAULA tickets has significantly decreased since the 21-ordinance, tickets for being in a bar after hours has risen from 63 in the 11 months before the ordinance to 166 since.

In one year since the ordinance took effect, both PAULA citations and public-intoxication arrests have fallen by more than 50 percent. By HAYLEY BRUCE hayley-bruce@uiowa.edu

On a warm May night around 12:45 a.m., three Iowa City police officers stood in the center of the Pedestrian Mall, arms folded, surveying four scattered groups of students. “We’re going to DC’s,” one officer declared, and the other two followed.

But just minutes after they enter the 21-only establishment, the three exit. Not a student in tow. On the same night last year, police said they might have issued a ticket to an underage student in the

bar. Not anymore. The underage students aren’t downtown, officers say. At least not after 10 p.m., when the ordinance kicks in. “Before 10, we’re busy,” said Iowa City police Officer Rob Cash. “Now, with 19- and 20-year-olds … we’re seeing an earlier bar rush — especially the [Friday After Class] crowd.”

The Iowa City City Council implemented the 21-ordinance — which restricts minors under 21 from entering bars — on June 1, 2010, and voters upheld it in November 2010. Since then, local police who work the downtown beat said they experience a rush from 4 p.m. to 10 p.m. Then things settle down.

The 21-ordinance has changed the way downtown bar-goers drink.

The 21-ordinance has taken its toll on downtown bars, cutting back the number of students who once flocked to the watering holes in consistent,

weekly herds. And those who have spent many weekends serving and observing the young crowds said they’re disappointed by the drop in the number of patrons at the bars.

Travel costs jump The Famous Iowa Writers’ Game The game between fiction and for UI police poetry writers began in the 1960s. The increase is partially due to a high turnover of police officers, officials say. By HAYLEY BRUCE hayley-bruce@uiowa.edu

The University of Iowa Department of Public Safety more than doubled its spending on travel between fiscal 2006 and fiscal 2010, according to statistics The Daily Iowan received through a public-records request. The expenses are largely a result of officer turnover and changes in law enforcement that have caused the department to train officers involved in special programs out-of-state over the past four years, said

Charles Green, the assistant vice president for the UI police. “W h a t ’ s changed is Green that, when I UI police VP first started [30 years ago], you saw men and women, their entire career, stay with one department, and a lot of people didn’t have college degrees,” Green said. “It’s the exact reversal now; I would say every candidate SEE TRAVEL, 3

The history of the game is more J.D. Salinger than J.K. Rowling. Much of it is done by word-of-mouth, and actual details are elusive. But what is known is unique, because some of the great writers of the 20th and 21st centuries have participated in a school year-end ritual that has nothing to do with the pen, paper, or keyboard. The Iowa Writers’ Workshop claims 17 Pulitzer Prizes and three recent U.S. poet laureates. But the thing most writers look forward to annually in the two-year program is an annual softball game

Check out a photo slide show and video feature on this past weekend’s Writers’ Workshop game.

between the poetry and fiction writers. This year’s game took place over the weekend on May 7. “The middle of winter, people will start talking about it sort of longingly, like ‘Don’t worry, man, we’ll be all right; as soon as spring comes around, we’ll be outside playing softball,’ ” said secondyear poetry student James Longley at one of his team’s many practices before the May 7 contest at Happy Hollow Park. The game originated in the 1960s, according to

2009 workshop graduate Joyce Turner. The poets were the first to dominate. To counteract that, some joked fiction program hopefuls had to include their batting averages on applica-

tions. When fiction won its first game in more than a decade in 2008, members of the faculty wept, said fiction writer Xander Maksik. SEE SOFTBALL, 3

Iowa Writers’ Workshop student Alex Walton swings at a baseball in Happy Hollow Park on May 7. The workshop’s game is divided between fiction and poetry writers, upholding a long tradition of a sports rivalry between the two groups.

Let us know about your upcoming event. Submit information to the DI’s new online event calendar and we’ll publish it there and on the Daily Break page. To submit a listing, visit dailyiowan.com/pages/calendarsubmit