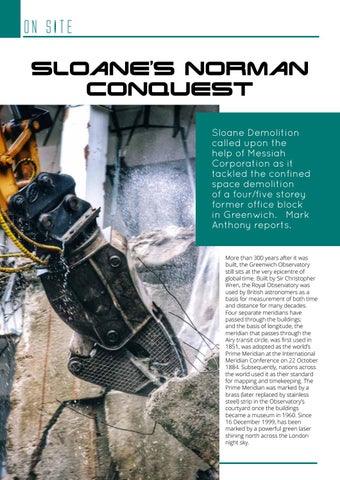 Sloane’s Norman Conquest Sloane Demolition called upon the help of Messiah Corporation as it tackled the confined space demolition of a four/five storey former office block in Greenwich. Mark Anthony reports. More than 300 years after it was built, the Greenwich Observatory still sits at the very epicentre of global time. Built by Sir Christopher Wren, the Royal Observatory was used by British astronomers as a basis for measurement of both time and distance for many decades. Four separate meridians have passed through the buildings; and the basis of longitude, the meridian that passes through the Airy transit circle, was first used in 1851, was adopted as the world’s Prime Meridian at the International Meridian Conference on 22 October 1884. Subsequently, nations across the world used it as their standard for mapping and timekeeping. The Prime Meridian was marked by a brass (later replaced by stainless steel) strip in the Observatory’s courtyard once the buildings became a museum in 1960. Since 16 December 1999, has been marked by a powerful green laser shining north across the London night sky.