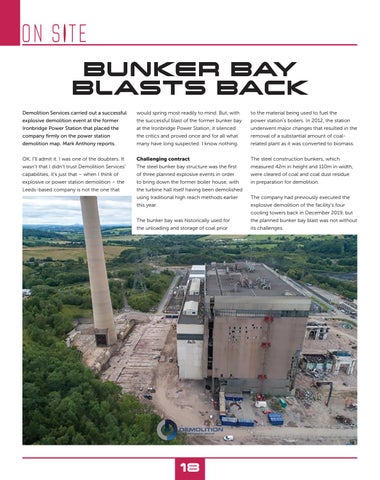 would spring most readily to mind. But, with the successful blast of the former bunker bay at the Ironbridge Power Station, it silenced the critics and proved once and for all what many have long suspected: I know nothing.

to the material being used to fuel the power station’s boilers. In 2012, the station underwent major changes that resulted in the removal of a substantial amount of coalrelated plant as it was converted to biomass.

OK, I’ll admit it. I was one of the doubters. It wasn’t that I didn’t trust Demolition Services’ capabilities, it’s just that – when I think of explosive or power station demolition – the Leeds-based company is not the one that

Challenging contract The steel bunker bay structure was the first of three planned explosive events in order to bring down the former boiler house, with the turbine hall itself having been demolished using traditional high reach methods earlier this year.

The steel construction bunkers, which measured 42m in height and 110m in width, were cleared of coal and coal dust residue in preparation for demolition.

The company had previously executed the explosive demolition of the facility’s four cooling towers back in December 2019, but the planned bunker bay blast was not without its challenges. A new look, a new publishing partner but the same AWESOME industry content. In this issue, you will find details of a new approach to explos...

A new look, a new publishing partner but the same AWESOME industry content. In this issue, you will find details of a new approach to explos...