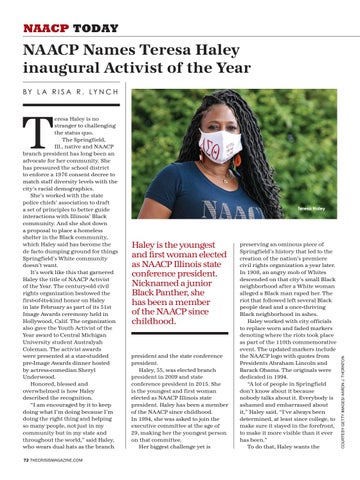 Haley is the youngest and first woman elected as NAACP Illinois state conference president. Nicknamed a junior Black Panther, she has been a member of the NAACP since childhood.

preserving an ominous piece of Springfield’s history that led to the creation of the nation’s premiere civil rights organization a year later. In 1908, an angry mob of Whites descended on that city’s small Black neighborhood after a White woman alleged a Black man raped her. The riot that followed left several Black people dead and a once-thriving Black neighborhood in ashes. Haley worked with city officials to replace worn and faded markers denoting where the riots took place as part of the 110th commemorative event. The updated markers include the NAACP logo with quotes from Presidents Abraham Lincoln and Barack Obama. The originals were dedicated in 1994. “A lot of people in Springfield don’t know about it because nobody talks about it. Everybody is ashamed and embarrassed about it,” Haley said. “I’ve always been determined, at least since college, to make sure it stayed in the forefront, to make it more visible than it ever has been.” To do that, Haley wants the

eresa Haley is no stranger to challenging the status quo. The Springfield, Ill., native and NAACP branch president has long been an advocate for her community. She has pressured the school district to enforce a 1976 consent decree to match staff diversity levels with the city’s racial demographics. She’s worked with the state police chiefs’ association to draft a set of principles to better guide interactions with Illinois’ Black community. And she shot down a proposal to place a homeless shelter in the Black community, which Haley said has become the de facto dumping ground for things Springfield’s White community doesn’t want. It’s work like this that garnered Haley the title of NAACP Activist of the Year. The century-old civil rights organization bestowed the first-of-its-kind honor on Haley in late February as part of its 51st Image Awards ceremony held in Hollywood, Calif. The organization also gave the Youth Activist of the Year award to Central Michigan University student Australyah Coleman. The activist awards were presented at a star-studded pre-Image Awards dinner hosted by actress-comedian Sheryl Underwood. Honored, blessed and overwhelmed is how Haley described the recognition. “I am encouraged by it to keep doing what I’m doing because I’m doing the right thing and helping so many people, not just in my community but in my state and throughout the world,” said Haley, who wears dual hats as the branch

African Americans are dealing with two deadly pandemics — the underlying condition of racism and the coronavirus COVID-19. The worldwide protests in support of the Movement for Black Lives also underscored the disproportionate impact of the coronavirus on the Black community. The NAACP's message was clear: We Are Done Dying. 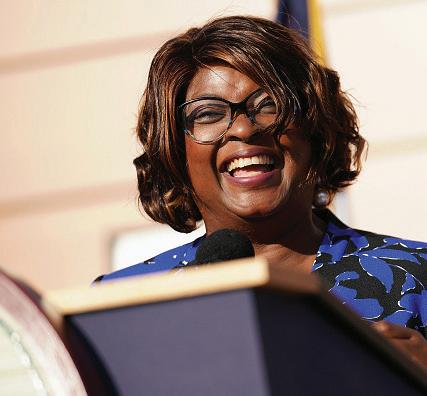 On June 17, 2020, Ella Jones was officially sworn in as the first African American and the first woman mayor Ferguson sits outside of St. Louis and became the city that infamously propelled the Black Lives Matter movement to international attention after a white police officer shot and killed unarmed Black teenager, Michael Brown, in 2014. 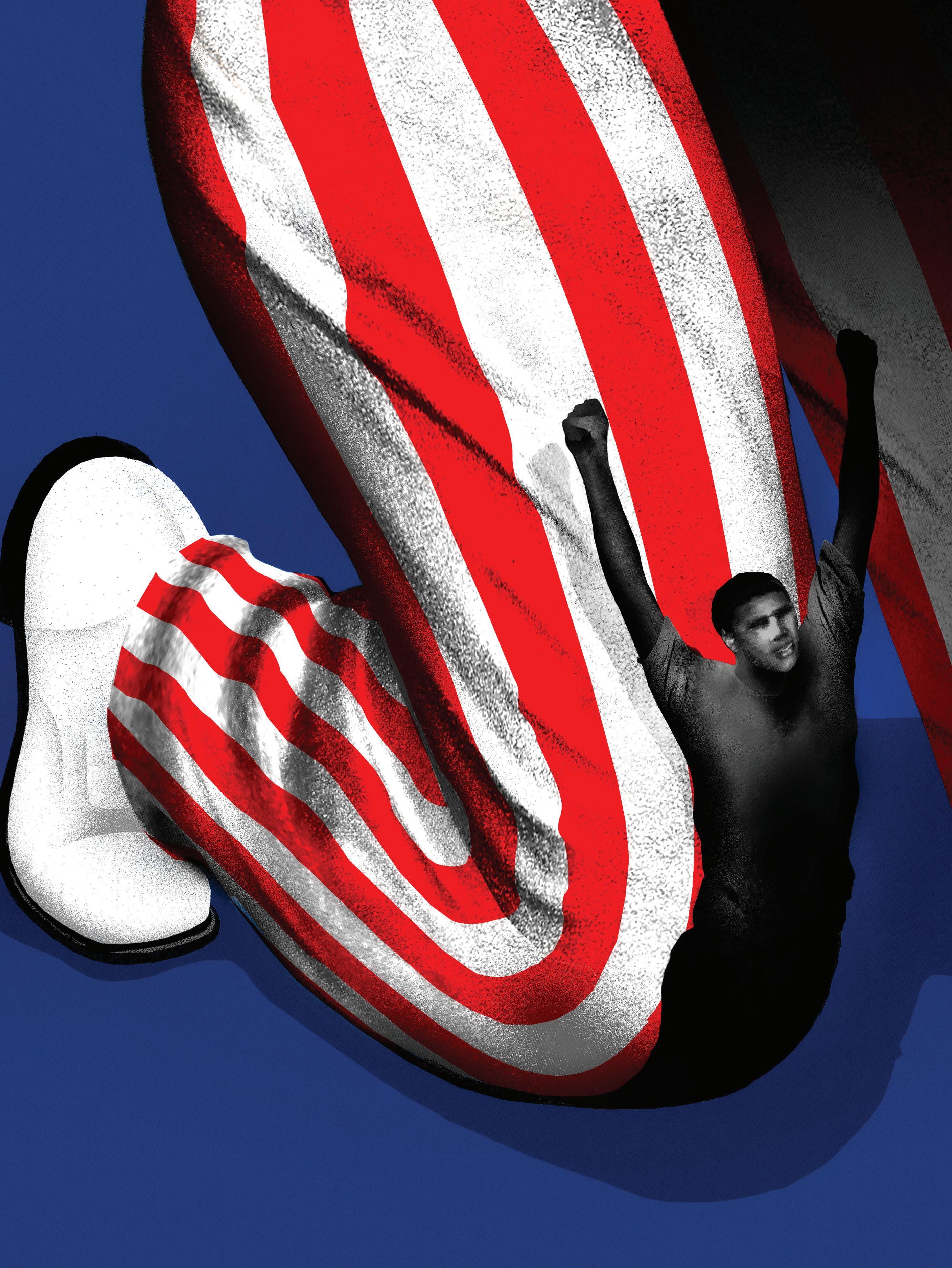 PROTEST, RACE AND THE AMERICAN FUTURE By Courtland Cox and Charles “Charlie” Cobb 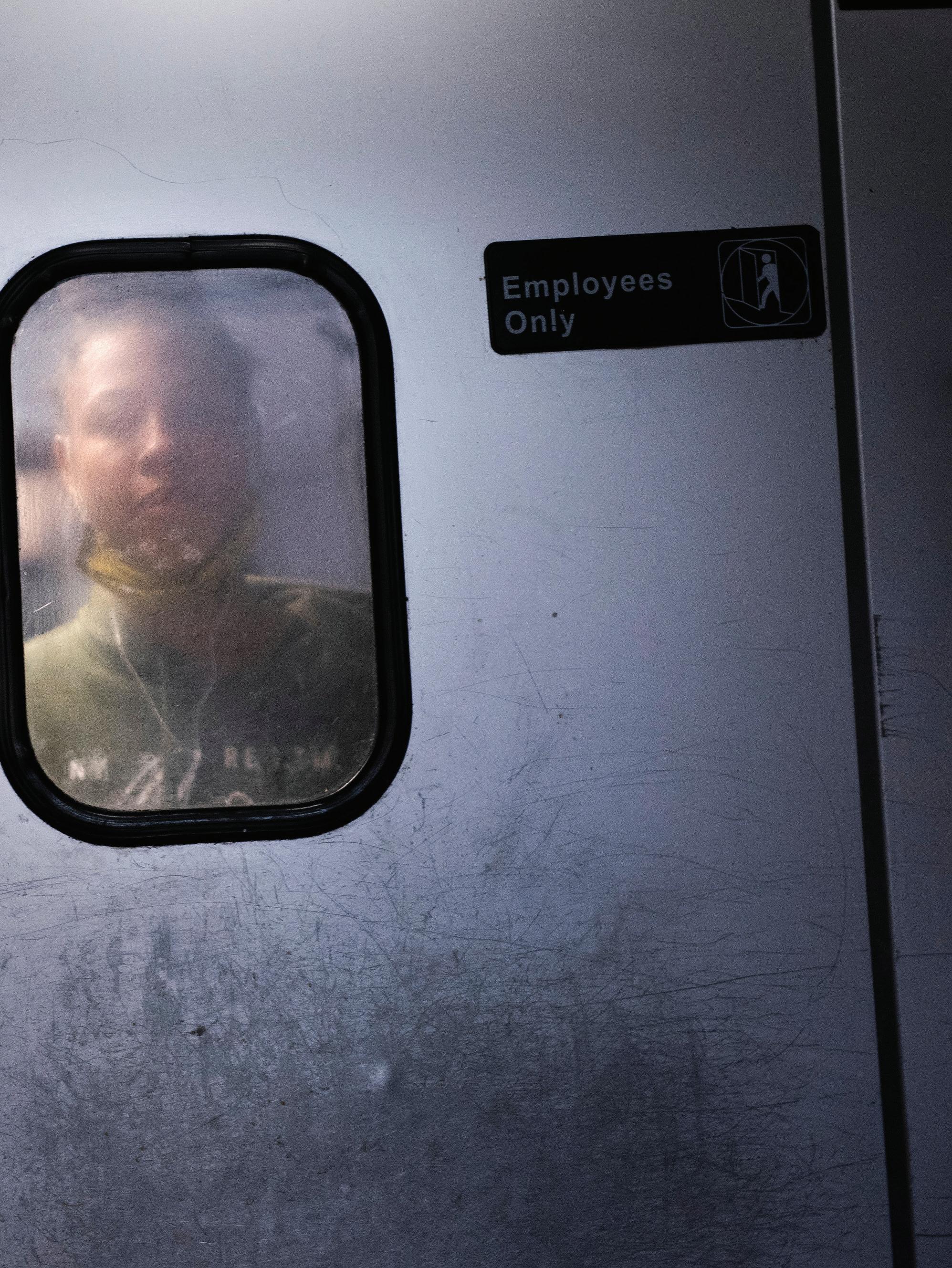 Black America and The Coronavirus Pandemic