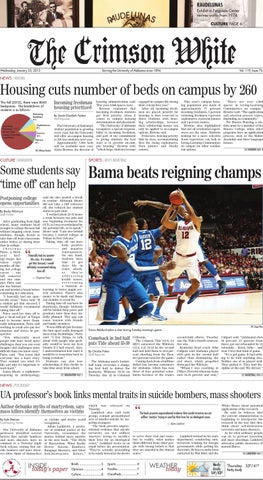 Serving the University of Alabama since 1894

Housing cuts number of beds on campus by 260 This fall (2012), there were 8060 bedspaces. The breakdown of students is as follows: Returning freshmen: 5%

The University of Alabama’s student population is growing every year, but the University will offer on-campus housing to 250 less students next year. Approximately 7,800 beds will be available next year, Alicia Browne, the director of

housing administration, said. This year, 8,060 spaces were. Browne explained that incoming freshmen students get first priority when it comes to campus housing determination and placement. “The University of Alabama recognizes a special responsibility to incoming freshmen, and part of our commitment to giving students the best start is to provide on-campus housing,” Browne said, “which helps students become

engaged in campus life during their crucial first year.” After all incoming freshmen are placed, priority for housing is then reserved to those students with housing scholarships, because their scholarship money can only be applied to on-campus options, Browne said. From here, housing priority falls by class, accommodating first the rising sophomores, then juniors and finally seniors.

This year’s campus housing population was made of approximately 77 percent incoming freshmen, 5 percent returning freshmen, 8 percent sophomores, 6 percent juniors and 4 percent seniors. Browne also highlighted that not all residential experiences are the same. Students looking for a more selective dorm experience can look to Living-Learning Communities on campus for other residential options.

“There are over 2,000 spaces in Living-Learning Communities on campus,” Browne said. “The application and selection process varies, depending on community.” For Honors Housing, a student must be a member of the Honors College, while other programs have an application process, such as the Mallet Assembly and three language houses.

Some students say ‘time off’ can help

said she also needed a break in routine. Although Moore did not take a full semester off, she reduced her student status to part-time. By Becky Robinson “I worked about 25-35 hours Staff Writer a week between two jobs and After graduating from high was beginning treatment for school, many students head OCD, so I was overwhelmed by straight to college the next fall my personal life, so to speak,” without skipping a beat. Some Moore said. “I am also behind students, though, decide to because I started college at take time off from classrooms Tulane in New Orleans.” Taking time off can have either before or during their both positive time in college. and negative Cheyenne consequences. Paiva, a thirdOn one hand, year biolI basically had my quarterstudents have ogy major, has life crisis. If a student time to get taken eight got that stressed, I would their life in months off durdeﬁnitely recommend taking order, whething her college time off. er they’re career – one addressing fall semester — Cheyenne Paiva health issues, and one sumovercoming mer. Paiva said a burnout or she was burned out and needed a break before learning to better juggle several activities. There’s also continuing her education. “I basically had my quar- money to be made and finanter-life crisis,” Paiva said. “If cial stability to reach for. Taking time off can have its a student got that stressed, I would definitely recommend drawbacks, though. Students will be behind their peers and taking time off.” Paiva used her time off to graduate later than they iniget a “dead-end job” at Target tially planned. This gap can and to become more finan- cause tension with friends cially independent. Paiva said and family members. “It was difficult just because working in retail also put her situation and stress in per- the time apart really damaged most of my friendships,” Paiva spective. “You inherently meet said. “I lost things to talk people who have faced more about with people who probchallenges than you can even ably would’ve been my best imagine and challenges more friends if I had stayed. Also, difficult than you know exist,” I underestimated how hard it Paiva said. “You learn that would be to transition back to everyone has a hard story. being a student.” Students can also lose They remind you what it’s like and why it’s important to scholarships if they decide to take time away from school. work hard.” Laura Moore, a sophomore SEE GRADUATION PAGE 3 majoring in anthropology,

Trevor Releford takes a shot during Tuesday evening’s game. Coliseum. The Crimson Tide (12-6, 4-1 SEC) outscored the Wildcats (12-6, 3-2) 35-22 in the second half and held them to 29.6 perBy Charlie Potter cent shooting from the floor, Staff Reporter 39.3 percent total for the game. Coming back from a halftime The Alabama men’s basketball team overcame a slump- deficit has become customary ing first half to defeat the for Alabama, which has won Kentucky Wildcats 59-55 on three of four potential comeTuesday Jan. 22 in Coleman backs because of the team’s

second-half efforts. Tuesday was the Tide’s fourth consecutive win. Kentucky head coach John Calipari said Alabama played with guts in the second half rather than dominating the stat sheet, which propelled them past his Wildcats. “When I was coaching at UMass, I loved it when my team shot 34-35 percent and won,”

Calipari said. “[Alabama] shot 36 percent, 15 percent from three, got out-rebounded by 12 rebounds – listen, folks – and won. I love that kind of game. “It’s a gut game. It had nothing to do with anything else. Neither one of us played well. They gutted it. They had discipline at the end. We did not.”

UA professor’s book links mental traits in suicide bombers, mass shooters which was released on Tuesday. Lankford also said both groups commit premeditated as victims and desire social acts of murder-suicide by targeting strangers. recognition. “The book presents unprecAdam Lankford, a professor of criminal justice at the edented evidence that suicide University, reexamines the terrorists are not selfless motive behind mass murder ‘martyrs’ trying to sacrifice in his new book, “The Myth their lives for an ideological of Martyrdom: What Really cause,” Lankford wrote in an Drives Suicide Bombers, email before his presentation. Rampage Shooters, and Other “They’re actually pretending Self-Destructive Killers,” to be solely driven by the desire

White House about potential applications of his research. He said he believes that The book presents unprecedented evidence that suicide terrorists are not the current administration is selﬂess ‘martyrs’ trying to sacriﬁce their lives for an ideological cause. beginning to incorporate his research in the way that they — Adam Lankford think about self-destructive terrorists and mass shooters. As for what ordinary people Lankford worked in the state can do to prevent terrorism to serve their God and cause, but in reality, what makes department, conducting anti- and mass shootings, Lankford them different from other peo- terrorism training for foreign advocates public awareness of ple with strong beliefs is that governments while getting his mental illness. they are suicidal in the clinical doctorate. He has recently been contacted by Wal-Mart and the sense.” SEE LANKFORD PAGE 2 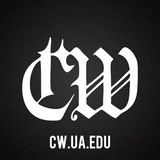 The Crimson White is a student published newspaper that seeks to inform the University of Alabama and the surrounding community. Roll Tide.

The Crimson White is a student published newspaper that seeks to inform the University of Alabama and the surrounding community. Roll Tide.