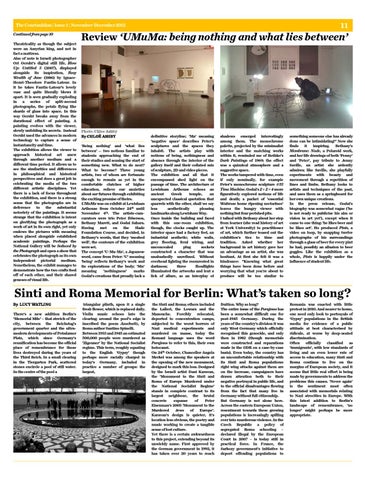 The Courtauldian | Issue 1 | November-December 2012 Continued from page 10 Theatricality as though the subject were an Assyrian king, and not in fact a mattress. Also of note is Israeli photographer Ori Gersht's digital still life, Blow Up: Untitled 5 (2007), displayed alongside its inspiration, Rosy Wealth of June (1886) by IgnaceHenri-Theodore Fantin-Latour. In it he takes Fantin-Latour’s lovely vase and quite literally blows it apart. It is seen gradually exploding in a series of split-second photographs, the petals flying like shards of glass into space. In this way Gersht breaks away from the durational effect of painting. A painting evolves with the viewer, slowly unfolding its secrets. Instead Gersht used the advances in modern technology to capture a sense of instantaneity and time. The exhibition allows the viewer to approach historical art anew through another medium and a different time period. It allows us to see the similarities and differences in philosophical and historical perspectives and does a great job in celebrating the media of the two different artistic disciplines. Yet there is a lack of focus throughout the exhibition, and there is a strong sense that the photographs are in deference to the substantial notoriety of the paintings. It seems strange that the exhibition is intent on glorifying the photograph as a work of art in its own right, yet only endows the pictures with meaning when placed alongside established academic paintings. Perhaps the National Gallery will be Seduced by the Photograph and open a show that celebrates the photograph as its own independent pictorial medium. Nonetheless, the exhibit manages to demonstrate how the two crafts feed off of each other, and their shared geneses of visual life.

Review ‘UMuMa: being nothing and what lies between’

Photo: Chloe Ashby By CHLOË ASHBY ‘Being nothing’ and ‘what lies between’ — two notions familiar to students approaching the end of their studies and sensing the start of something new. What to do next? What to become? Three young artists, two of whom are fortunate enough to remain as yet in the comfortable clutches of higher education, relieve our anxieties about our futures through exhibiting the exciting promise of theirs. UMuMa was on exhibit at Lewisham Arthouse from October 24th until November 4th. The artists-cumcurators were trio Peter Ibberson, Bethany Marett, and Godai Sahara. Having met on the Slade Foundation Course, and decided, in Bethany’s words, that they ‘meshed well’, the contours of the exhibition were set. The concept ‘U-Mu-Ma’, a Japanese word, came from Peter: ‘U’ meaning ‘being’ reflects Bethany’s work and its explorations of the body; ‘Mu’ meaning ‘nothingness’ marks Godai’s creations that proudly lack a

definitive storyline; ‘Ma’ meaning ‘negative space’ describes Peter’s sculptures and the spaces they inhabit. The artists play with notions of being, nothingness and absence through the interior of the gallery itself and their collated mix of sculpture, 2D and video pieces. The exhibition and all that it encompassed shed light on the passage of time. The architecture of Lewisham Arthouse echoes an ancient Greek temple, an unexpected classical quotation that quarrels with the other, shall we say less aesthetically pleasing landmarks along Lewisham Way. Once inside the building and faced with this one-room exhibition, though, the clocks caught up. The interior space had a factory feel, an industrial aesthetic; white walls, grey flooring, feral wiring, and unconcealed plug sockets constructed a character that was unabashedly unrefined. Without overhead lighting the roomrested in darkness; three floodlights illuminated the artworks and lent a lick of allure, as an interplay of

shadows emerged interestingly among them. The monochrome palette, projected by the minimalist interior and the matching works within it, reminded me of Rothko’s Dark Paintings of 1969; the effect was a quizzical atmosphere and a suggestive space. The works tampered with time, even if only nominally, for example Peter’s monochrome sculpture #53 Time Machine. Godai’s 2 + 2 = 4 more figuratively explored notions of life and death; a packet of ‘essential Waitrose home ripening nectarines’ leaves the hungry viewer with nothing but four perished pits. I talked with Bethany about her step from learner (she read history of art at York University) to practitioner of art, which further teased out the exhibition’s ties to time and tradition. Asked whether her background in art history gave her an advantage as an artist, she was hesitant. At first she felt it was a hindrance: “Knowing what great things have been done before and worrying that what you’re about to produce will be too similar to

something someone else has already done can be intimidating!” Now she finds it inspiring. Bethany’s Membrane: Nude, a Polaroid work, and her life drawings of both ‘Penny’ and ‘Peter’, pay tribute to Jenny Saville, an artist she ardently admires; like Saville, she playfully experiments with beauty and movement through a repetition of lines and limbs. Bethany looks to artists and techniques of the past, and uses them as a springboard for her own unique creations. In the press release, Godai’s biography was somewhat vague (‘he is not ready to publicise his aim or vision in art yet’), except when it came to one thing: ‘he likes beer and he likes art’. He produced Pints, a video on loop, by snapping twelve photographs of his surroundings through a glass of beer for every pint he had, possibly an allusion to beer goggles. Like the exhibition as a whole, Pints is happily under the influence of student life.

Sinti and Roma Memorial for Berlin: What’s taken so long?

There’s a new addition Berlin’s ‘Memorial Mile’ – that stretch of the city, between the Reichstag’s government quarter and the ultramodern developments of Potsdamer Platz, which since Germany’s reunification has become the official place of remembrance for those lives destroyed during the years of the Third Reich. In a small clearing in the Tiergarten Park, scattered stones encircle a pool of still water. In the centre of the pool a

triangular plinth, upon it a single fresh flower, which is replaced daily. Violin music echoes into the clearing; around the pool’s edge is inscribed the poem Auschwitz, by Roma author Santino Spinelli. Between 1933 and 1945 an estimated 500,000 people were murdered as ‘Zigeuner’ by the National Socialist regime. This term, roughly equating to the English ‘Gypsy’ though perhaps more racially charged in today’s Germany, included in practice a number of groups: the largest,

the Sinti and Roma; others included the Lalleri, the Lowara and the Manouche. Forcibly relocated, deported to concentration camps, subjected to the worst horrors of Nazi medical experiments and murdered en masse, today the Romani language uses the word Porajmos to refer to this, their own holocaust. On 24th October, Chancellor Angela Merkel was among the speakers at the opening of the new monument, designed to mark this loss. Designed by the Israeli artist Dani Karavan, the ‘Monument to the Sinti and Roma of Europe Murdered under the National Socialist Regime’ stands in complete contrast to its largest neighbour, the brutal concrete expanse of Peter Eisenman’s 2005 ‘Monument to the Murdered Jews of Europe’. Karavan’s design is quieter, it’s location less obvious, the poetry and music working to create a tangible sense of lost culture. Yet there is a certain awkwardness to this project, extending beyond its unwieldy name. First approved by the German government in 1992, it has taken over 20 years to reach

fruition. Why so long? The entire issue of the Porajmos has been a somewhat difficult one for post-1945 Germany. During the years of the country’s division it was only West Germany which officially recognised this genocide, and only then in 1982 (though memorials were constructed and reparations made in the GDR on a case-by-case basis). Even today, the country has an uncomfortable relationship with its Sinti and Roma populations: right wing attacks against them are on the increase, campaigners have drawn attention both to their negative portrayal in public life, and to the official disadvantages flowing from the fact that many live in Germany without full citizenship. But Germany is not alone here. Across the eastern European Union, resentment towards these growing populations is increasingly spilling over into murderous violence. In the Czech Republic a policy of segregated Roma schooling – declared illegal by the European Court in 2007 – is today still in practical force. In France, the Sarkozy government’s initiative to deport offending populations to

Romania was enacted with little protest in 2010. And nearer to home, one need only look to portrayals of ‘Gypsy’ populations in the British media for evidence of a public attitude at best characterised by ridicule, at worse by deep-seated discrimination. Often officially classified as ‘immigrants’, with low standards of living and an even lower rate of access to education, many Sinti and Roma continue to live on the margins of European society, and it seems that little real effort is being made by governments to address the problems this causes. ‘Never again’ is the sentiment most often associated with memorials relating to Nazi atrocities in Europe. With this latest addition to Berlin’s landscape of remembrance, ‘no longer’ might perhaps be more appropriate. 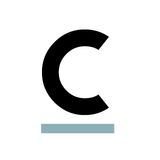 November-December 2012. The Courtauldian is the student paper of the Courtuald Institute of Art. The Editor-in-Chief is Hannah Zafiropoulos....

November-December 2012. The Courtauldian is the student paper of the Courtuald Institute of Art. The Editor-in-Chief is Hannah Zafiropoulos....