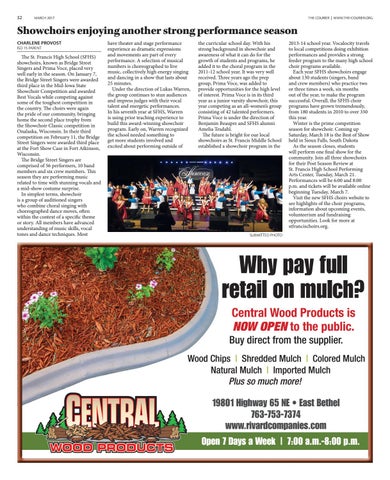 The St. Francis High School (SFHS) showchoirs, known as Bridge Street Singers and Prima Voce, placed very well early in the season. On January 7, the Bridge Street Singers were awarded third place in the Mid-Iowa State Showchoir Competition and awarded Best Vocals while competing against some of the toughest competition in the country. The choirs were again the pride of our community, bringing home the second place trophy from the Showchoir Classic competition in Onalaska, Wisconsin. In their third competition on February 11, the Bridge Street Singers were awarded third place at the Fort Show Case in Fort Atkinson, Wisconsin. The Bridge Street Singers are comprised of 56 performers, 10 band members and six crew members. This season they are performing music related to time with stunning vocals and a mid-show costume surprise. In simplest terms, showchoir is a group of auditioned singers who combine choral singing with choreographed dance moves, often within the context of a specific theme or story. All members have advanced understanding of music skills, vocal tones and dance techniques. Most

have theater and stage performance experience as dramatic expressions and movements are part of every performance. A selection of musical numbers is choreographed to live music, collectively high energy singing and dancing in a show that lasts about 25 minutes. Under the direction of Lukas Warren, the group continues to stun audiences and impress judges with their vocal talent and energetic performances. In his seventh year at SFHS, Warren is using prior teaching experience to build this award-winning showchoir program. Early on, Warren recognized the school needed something to get more students involved and excited about performing outside of

the curricular school day. With his strong background in showchoir and awareness of what it can do for the growth of students and programs, he added it to the choral program in the 2011-12 school year. It was very well received. Three years ago the prep group, Prima Voce, was added to provide opportunities for the high level of interest. Prima Voce is in its third year as a junior varsity showchoir, this year competing as an all-womenâ&amp;#x20AC;&amp;#x2122;s group consisting of 42 talented performers. Prima Voce is under the direction of Benjamin Beaupre and SFHS alumni Amelia Tesdahl. The future is bright for our local showchoirs as St. Francis Middle School established a showchoir program in the

2013-14 school year. Vocalocity travels to local competitions doing exhibition performances and provides a strong feeder program to the many high school choir programs available. Each year SFHS showchoirs engage about 130 students (singers, band and crew members) who practice two or three times a week, six months out of the year, to make the program successful. Overall, the SFHS choir programs have grown tremendously, from 180 students in 2010 to over 350 this year. Winter is the prime competition season for showchoir. Coming up Saturday, March 18 is the Best of Show held in Sioux Falls, South Dakota As the season closes, students will perform one final show for the community. Join all three showchoirs for their Post Season Review at St. Francis High School Performing Arts Center, Tuesday, March 21. Performances will be 6:00 and 8:00 p.m. and tickets will be available online beginning Tuesday, March 7. Visit the new SFHS choirs website to see highlights of the choir programs, information about upcoming events, volunteerism and fundraising opportunities. Look for more at stfrancischoirs.org.

Why pay full retail on mulch? Central Wood Products is NOW OPEN to the public.

Buy direct from the supplier. 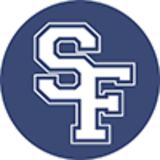