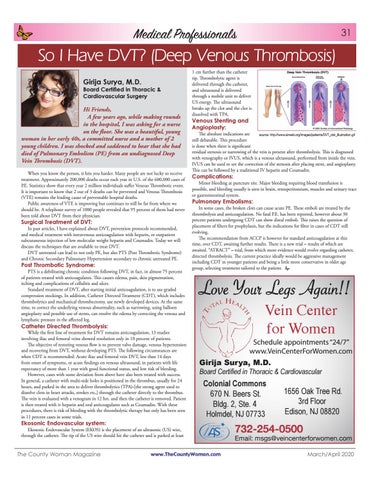 Hi Friends, A few years ago, while making rounds in the hospital, I was asking for a nurse on the floor. She was a beautiful, young woman in her early 40s, a committed nurse and a mother of 2 young children. I was shocked and saddened to hear that she had died of Pulmonary Embolism (PE) from an undiagnosed Deep Vein Thrombosis (DVT). When you know the person, it hits you harder. Many people are not lucky to receive treatment. Approximately 200,000 deaths occur each year in U.S. of the 600,000 cases of P.E. Statistics show that every year 2 million individuals suffer Venous Thrombotic event. It is important to know that 2 out of 3 deaths can be prevented and Venous Thrombosis (VTE) remains the leading cause of preventable hospital deaths. Public awareness of VTE is improving but continues to still be far from where we should be. A telephone survey of 1000 people revealed that 95 percent of them had never been told about DVT from their physician.

In past articles, I have explained about DVT, prevention protocols recommended, and medical treatment with intravenous anticoagulation with heparin, or outpatient subcutaneous injection of low molecular weight heparin and Coumadin. Today we will discuss the techniques that are available to treat DVT. DVT untreated can lead to not only PE, but also PTS (Post Thrombotic Syndrome) and Chronic Secondary Pulmonary Hypertension secondary to chronic untreated PE.

PTS is a debilitating chronic condition following DVT, in fact, in almost 75 percent of patients treated with anticoagulants. This causes edema, pain, skin pigmentation, itching and complications of cellulitis and ulcer. Standard treatment of DVT, after starting initial anticoagulation, is to use graded compression stockings. In addition, Catheter Directed Treatment (CDT), which includes thrombolytics and mechanical thrombectomy, use newly developed devices. At the same time, to correct the underlying venous abnormality, such as narrowing, using balloon angioplasty and possible use of stents, can resolve the edema by correcting the venous and lymphatic pressure in the affected leg.

The absolute indications are source: http://www.sirweb.org/images/patients/DVT_clot_illustration.gif still debatable. This procedure is done when there is significant residual stenosis or narrowing of the vein is present after thrombolysis. This is diagnosed with venography or IVUS, which is a venous ultrasound, performed from inside the vein. IVUS can be used to see the correction of the stenosis after placing stent, and angioplasty. This can be followed by a traditional IV heparin and Coumadin.

In some cases, the broken clots can cause acute PE. These emboli are treated by the thrombolysis and anticoagulation. No fatal P.E. has been reported, however about 30 percent patients undergoing CDT can show distal emboli. This raises the question of placement of filters for prophylaxis, but the indications for filter in cases of CDT still evolving. The recommendation from ACCP is however for standard anticoagulation at this time, over CDT, awaiting further results. There is a new trial – results of which are awaited. “ATRACT” – trial, from which more evidence would evolve regarding catheter, directed thrombolysis. The current practice ideally would be aggressive management including CDT in younger patients and being a little more conservative in older age group, selecting treatment tailored to the patient.

While the first line of treatment for DVT remains anticoagulation, 13 studies involving iliac and femoral veins showed resolution only in 10 percent of patients. The objective of restoring venous flow is to prevent valve damage, venous hypertension and recovering from DVT, without developing PTS. The following circumstances are when CDT is recommended: Acute iliac and femoral vein DVT, less than 14 days from onset of symptoms, or acute findings on venous ultrasound, in patients with life expectancy of more than 1 year with good functional status, and low risk of bleeding. However, cases with some deviation from above have also been treated with success. In general, a catheter with multi-side holes is positioned in the thrombus, usually for 24 hours, and parked in the area to deliver thrombolytics (TPA)-[the strong agent used to dissolve clots in heart attacks, strokes etc,] through the catheter directly to the thrombus. The vein is evaluated with a venogram in 12 hrs. and then the catheter is removed. Patient is then treated with iv heparin and oral anticoagulants such as Coumadin. With these procedures, there is risk of bleeding with the thrombolytic therapy but only has been seen in 11 percent cases in some trials.

Ekosonic Endovascular System (EKOS) is the placement of an ultrasonic (US) wire, through the catheter. The tip of the US wire should hit the catheter and is parked at least 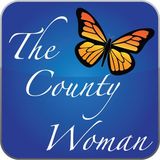 The County Woman ™ is part of a nationally syndicated publication and has been around for over 31 years. There are over 371 other counties t...

The County Woman ™ is part of a nationally syndicated publication and has been around for over 31 years. There are over 371 other counties t...