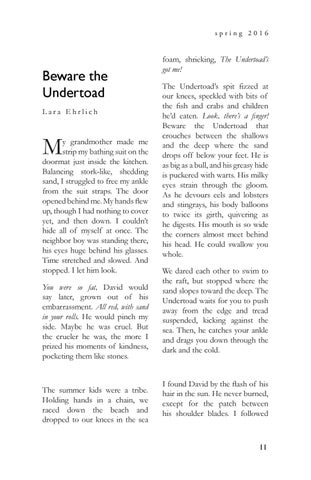 y grandmother made me strip my bathing suit on the doormat just inside the kitchen. Balancing stork-like, shedding sand, I struggled to free my ankle from the suit straps. The door opened behind me. My hands flew up, though I had nothing to cover yet, and then down. I couldn’t hide all of myself at once. The neighbor boy was standing there, his eyes huge behind his glasses. Time stretched and slowed. And stopped. I let him look. You were so fat, David would say later, grown out of his embarrassment. All red, with sand in your rolls. He would pinch my side. Maybe he was cruel. But the crueler he was, the more I prized his moments of kindness, pocketing them like stones.

The summer kids were a tribe. Holding hands in a chain, we raced down the beach and dropped to our knees in the sea

foam, shrieking, The Undertoad’s got me! The Undertoad’s spit fizzed at our knees, speckled with bits of the fish and crabs and children he’d eaten. Look, there’s a finger! Beware the Undertoad that crouches between the shallows and the deep where the sand drops off below your feet. He is as big as a bull, and his greasy hide is puckered with warts. His milky eyes strain through the gloom. As he devours eels and lobsters and stingrays, his body balloons to twice its girth, quivering as he digests. His mouth is so wide the corners almost meet behind his head. He could swallow you whole. We dared each other to swim to the raft, but stopped where the sand slopes toward the deep. The Undertoad waits for you to push away from the edge and tread suspended, kicking against the sea. Then, he catches your ankle and drags you down through the dark and the cold.

I found David by the flash of his hair in the sun. He never burned, except for the patch between his shoulder blades. I followed