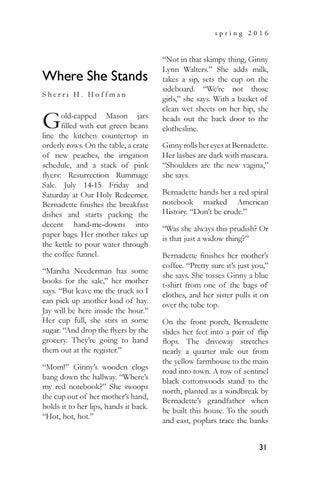 Where She Stands Sherri H. Hoffman

old-capped Mason jars filled with cut green beans line the kitchen countertop in orderly rows. On the table, a crate of new peaches, the irrigation schedule, and a stack of pink flyers: Resurrection Rummage Sale. July 14-15 Friday and Saturday at Our Holy Redeemer. Bernadette finishes the breakfast dishes and starts packing the decent hand-me-downs into paper bags. Her mother takes up the kettle to pour water through the coffee funnel. “Marsha Neederman has some books for the sale,” her mother says. “But leave me the truck so I can pick up another load of hay. Jay will be here inside the hour.” Her cup full, she stirs in some sugar. “And drop the flyers by the grocery. They’re going to hand them out at the register.” “Mom!” Ginny’s wooden clogs bang down the hallway. “Where’s my red notebook?” She swoops the cup out of her mother’s hand, holds it to her lips, hands it back. “Hot, hot, hot.”

“Not in that skimpy thing, Ginny Lynn Walters.” She adds milk, takes a sip, sets the cup on the sideboard. “We’re not those girls,” she says. With a basket of clean wet sheets on her hip, she heads out the back door to the clothesline. Ginny rolls her eyes at Bernadette. Her lashes are dark with mascara. “Shoulders are the new vagina,” she says. Bernadette hands her a red spiral notebook marked American History. “Don’t be crude.” “Was she always this prudish? Or is that just a widow thing?” Bernadette finishes her mother’s coffee. “Pretty sure it’s just you,” she says. She tosses Ginny a blue t-shirt from one of the bags of clothes, and her sister pulls it on over the tube top. On the front porch, Bernadette slides her feet into a pair of flip flops. The driveway stretches nearly a quarter mile out from the yellow farmhouse to the main road into town. A row of sentinel black cottonwoods stand to the north, planted as a windbreak by Bernadette’s grandfather when he built this house. To the south and east, poplars trace the banks 31