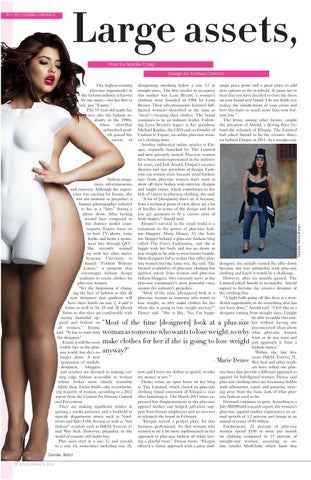 fashion magazines, advertisements and runways. Although the experience was exciting for Emme, she was not immune to prejudice: a famous photographer referred to her as a “fatty” during a photo shoot. After feeling second best compared to her thinner model counterparts, Emme went on to host TV shows, write books and helm a sportswear line through QVC. She recently teamed up with her alma mater, Syracuse University, to launch “Fashion Without Limits,” a program that encourages fashion design students to create clothes for plus-size women. “It’s the beginning of changing the face of fashion so that all new designers that graduate will have their hands on size 2, 4 and 6 forms as well as 16, 18 and 20 [dress] forms so that they are comfortable with seeing beautiful apparel and fashion on all women,” Emme said. “It has to start with the designer.” Emme is still the most visible face in the plussize world, but she’s no longer alone. A new generation of models, designers, bloggers and retailers are devoted to making cutting edge fashion accessible to women whose bodies more closely resemble Adele than Taylor Swift—the overwhelming majority of women, according to a 2012 report from the Centers for Disease Control and Prevention. They are making significant strides in gaining a media presence and a foothold in upscale department stores such as Nordstrom and Saks Fifth Avenue as well as “fast fashion” retailers such as H&M, Forever 21 and Wet Seal. However, prejudice in the world of couture still holds fast. Plus sizes start at a size 12 and extend to a size 24, sometimes including size 26,

designating anything below a size 12 as straight sizes. The first retailer to recognize this market was Lane Bryant, a women’s clothing store founded in 1904 by Lena Bryant. Their advertisements featured fullfigured women—described at the time as “stout”—wearing their clothes. The brand continues to be an industry leader. Following Lena Bryant’s legacy is her grandson, Michael Kaplan, the CEO and co-founder of Fashion to Figure, an online plus-size women’s clothing store. Another influential online retailer is Eloquii, originally launched by The Limited and now privately owned. Plus-size women have been underrepresented in the industry for years, said Jodi Arnold, Eloquii’s creative director and vice president of design. Fashions can remain static because retail backers may think plus-size women don’t want to show off their bodies with intricate designs and bright colors, which contributes to the lack of variety in plus-size clothing, she said. “A lot of [designers] don’t try it because, from a technical point of view, there are a lot of hurdles in terms of the design and how you get garments to fit a various array of body shapes,” Arnold said. Eloquii’s survival in the retail world is a testament to the power of plus-size fashion bloggers. Marie Denee, 33, the fashion blogger behind a plus-size fashion blog called The Curvy Fashionista, said she is happy with her body and has no desire to lose weight to be able to wear luxury brands. Most designers fail to realize that other plussize women feel the same way, she said. The limited availability of plus-size clothing has spurred outcry from women and plus-size fashion bloggers, who currently serve as the plus-size community’s most powerful voice against the industry’s prejudice. “Most of the time, [designers] look at a plus-size woman as someone who wants to lose weight, so why make clothes for her when she is going to lose weight anyway?” Denee said. “She is like, ‘No, I’m happy

range price point and a great place to add new options to the wardrobe. It pains me to hear that you have decided to close the doors on your brand new brand. I do not think you realize the ramifications of your errors and how this hurts so much more than your bottom line.” The letter, among other factors, caught the attention of Arnold, a driving force behind the relaunch of Eloquii. The Limited had asked Arnold to be the creative director behind Eloquii in 2011. As a straight-size

designer, she initially turned the offer down because she was unfamiliar with plus-size clothing and knew it would be a challenge. However, after six months passed, The Limited asked Arnold to reconsider. Arnold agreed to become the creative designer of the clothing line. “A light bulb going off like here is a wonderful opportunity to do something that has not been done,” Arnold said. “I felt like as a designer coming from straight sizes, I might be able to tackle this market without having any preconceived ideas about what plus-size women want or do not want and just approach it from a fashion stance.” Within the last five years, H&M, Forever 21, – Marie Denee Wet Seal and other retailers have rolled out plusnow and I have my dollars to spend, so take size lines that provide a different approach to my money or not.’” apparel for full-figured women. Denee said Denee wrote an open letter on her blog plus-size clothing lines are becoming bolder to The Limited, which closed its plus-size with silhouettes, colors and patterns, strayclothing brand extension of Eloquii a year ing away from the basic look of what plusafter launching it. The March 2013 letter ex- size fashion used to be. pressed her disappointment in the plus-size Demand continues to grow. According to a apparel market and helped galvanize sup- July IBISWorld research report, the women’s port from former employees and an investor plus-size apparel market experiences an anto relaunch the brand in February. nual growth of 3.2 percent and brings in an “Eloquii served a perfect place for that annual revenue of $9 billion. business professional, for that woman who Furthermore, 21 percent of plus-size wanted to be a bit more sophisticated in her women spend $150 or more per month approach to plus-size fashion all while hav- on clothing compared to 15 percent of ing a playful twist,” Denee wrote. “Eloquii straight-size women, according to onoffered a classic approach with a great mid- line retailer ModCloth, which hints that

“Most of the time [designers] look at a plus-size woman as someone who wants to lose weight, so why make clothes for her if she is going to lose weight anyway?” 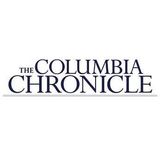