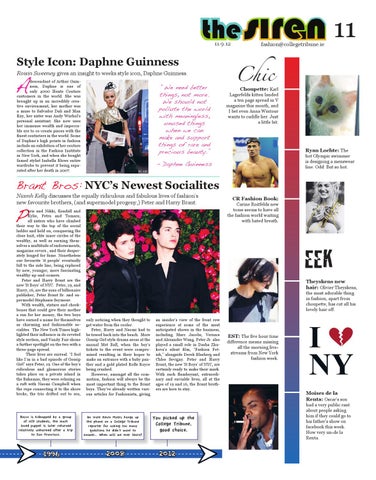 Roisin Sweeney gives an insight to weeks style icon, Daphne Guinness. descendant of Arthur Guinness, Daphne is one of only 4000 Haute Couture customers in the world. She was brought up in an incredibly creative environment, her mother was a muse to Salvador Dali and Man Ray, her sister was Andy Warhol’s personal assistant. She now uses her immense wealth and impeccable eye to co-create pieces with the ﬁnest couturiers in the world. Some of Daphne’s high points in fashion include an exhibition of her couture collection in the Fashion Institute in New York, and when she bought famed stylist Isabella Blows entire wardrobe to prevent it being separated after her death in 2007.

“We need better things, not more. We should not pollute the world with meaningless, unused things when we can make and support things of rare and precious beauty.”

Choupette: Karl Lagerfelds kitten landed a ten page spread in V magazine this month, and I bet even Anna Wintour wants to cuddle her. Just a little bit.

Ryan Lochte: The hot Olympic swimmer is designing a menswear line. Odd. But so hot.

aris and Nikki, Kendall and Kylie, Petra and Tamara; all sisters who have climbed their way to the top of the social ladder and held on, conquering the close knit, elite inner circles of the wealthy, as well as earning themselves a multitude of endorsements, magazine covers , and their desperately longed for fame. Nonetheless our favourite ‘it people’ eventually fall to the side line, being replaced by new, younger, more fascinating wealthy up-and-comers. Peter and Harry Brant are the new ‘It Boys’ of NYC. Peter, 19, and Harry, 16, are the sons of billionaire publisher, Peter Brant Sr. and supermodel Stephanie Seymour. With wealth, stature and cheekbones that could give their mother a run for her money, the two boys have earned a name for themselves as charming and fashionable socialites. The New York Times highlighted their inﬂuence in its coveted style section, and Vanity Fair shone a further spotlight on the two with a three-page spread. Their lives are surreal. “I feel like I’m in a bad episode of Gossip Girl” says Peter, 19. One of the boy’s ridiculous and glamorous stories takes place on a private island in the Bahamas; they were relaxing on a raft with Naomi Campbell when the rope connecting it to the shore broke, the trio drifted out to sea,

Bosco is kidnapped by a group of UCD students, the much loved puppet is later returned relatively unharmed after a trip to San Francisco.

Carine Roitfelds new tome seems to have all the fashion world waiting with bated breath.

EEK Theyskens new hair: Olivier Theyskens, the most adorable thing in fashion, apart from choupette, has cut all his lovely hair off.

only noticing when they thought to get water from the cooler. Peter, Harry and Naomi had to be towed back into the beach. More Gossip Girl style drama arose at the annual Met Ball, when the boy’s tickets to the event were compromised resulting in their hopes to make an entrance with a baby panther and a gold plated Rolls Royce being crushed. However, amongst all the commotion, fashion will always be the most important thing to the Brant boys. They’ve already written various articles for Fashionista, giving

An irate Kevin Myers hangs up the phone on a College Tribune reporter for asking too many questions he didn’t want to answer… When will we ever learn?

an insider’s view of the front row experience at some of the most anticipated shows in the business, including Marc Jacobs, Versace and Alexander Wang. Peter Jr. also played a small role in Dasha Zhukova’s silent ﬁlm, “Fashion Fetish,” alongside Derek Blasberg and Chloe Sevigny. Peter and Harry Brant, the new ‘It Boys’ of NYC, are certainly ready to make their mark. With such ﬂamboyant, extraordinary and enviable lives, all at the ages of 19 and 16, the Brant brothers are here to stay.

You picked up the College Tribune, good choice.

had a very public rant about people asking him if they could go to his father’s show on facebook this week. How very un-de la Renta. 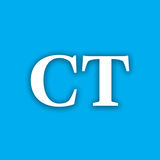