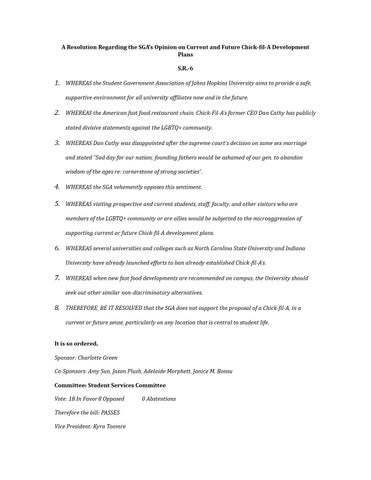 A Resolution Regarding the SGA’s Opinion on Current and Future Chick-fil-A Development Plans S.R.-6

1. WHEREAS the Student Government Association of Johns Hopkins University aims to provide a safe, supportive environment for all university affiliates now and in the future.

3. WHEREAS Dan Cathy was disappointed after the supreme court’s decision on same sex marriage and stated “Sad day for our nation; founding fathers would be ashamed of our gen. to abandon wisdom of the ages re: cornerstone of strong societies”.

4. WHEREAS the SGA vehemently opposes this sentiment. 5. WHEREAS visiting prospective and current students, staff, faculty, and other visitors who are members of the LGBTQ+ community or are allies would be subjected to the microaggression of supporting current or future Chick-fil-A development plans.

6. WHEREAS several universities and colleges such as North Carolina State University and Indiana University have already launched efforts to ban already established Chick-fil-A’s.

7. WHEREAS when new fast food developments are recommended on campus, the University should seek out other similar non-discriminatory alternatives.

8. THEREFORE, BE IT RESOLVED that the SGA does not support the proposal of a Chick-fil-A, in a current or future sense, particularly on any location that is central to student life. It is so ordered. Sponsor: Charlotte Green Co-Sponsors: Amy Sun, Jason Plush, Adelaide Morphett, Janice M. Bonsu Committee: Student Services Committee Vote: 18 In Favor 8 Opposed Therefore the bill: PASSES Vice President: Kyra Toomre