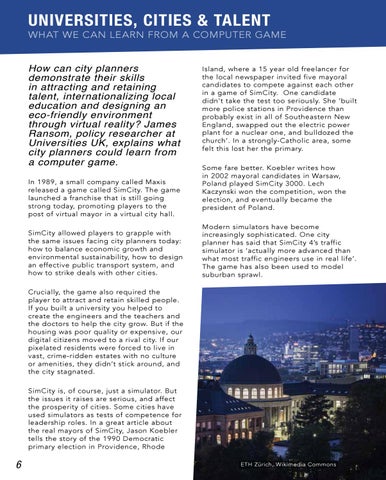 what we can learn from a computer game How can city planners demonstrate their skills in attracting and retaining talent, internationalizing local education and designing an eco-friendly environment through virtual reality? James Ransom, policy researcher at Universities UK, explains what city planners could learn from a computer game. In 1989, a small company called Maxis released a game called SimCity. The game launched a franchise that is still going strong today, promoting players to the post of virtual mayor in a virtual city hall. SimCity allowed players to grapple with the same issues facing city planners today: how to balance economic growth and environmental sustainability, how to design an effective public transport system, and how to strike deals with other cities.

Island, where a 15 year old freelancer for the local newspaper invited five mayoral candidates to compete against each other in a game of SimCity. One candidate didn't take the test too seriously. She ‘built more police stations in Providence than probably exist in all of Southeastern New England, swapped out the electric power plant for a nuclear one, and bulldozed the church’. In a strongly-Catholic area, some felt this lost her the primary. Some fare better. Koebler writes how in 2002 mayoral candidates in Warsaw, Poland played SimCity 3000. Lech Kaczynski won the competition, won the election, and eventually became the president of Poland. Modern simulators have become increasingly sophisticated. One city planner has said that SimCity 4’s traffic simulator is ‘actually more advanced than what most traffic engineers use in real life’. The game has also been used to model suburban sprawl.

Crucially, the game also required the player to attract and retain skilled people. If you built a university you helped to create the engineers and the teachers and the doctors to help the city grow. But if the housing was poor quality or expensive, our digital citizens moved to a rival city. If our pixelated residents were forced to live in vast, crime-ridden estates with no culture or amenities, they didn’t stick around, and the city stagnated. SimCity is, of course, just a simulator. But the issues it raises are serious, and affect the prosperity of cities. Some cities have used simulators as tests of competence for leadership roles. In a great article about the real mayors of SimCity, Jason Koebler tells the story of the 1990 Democratic primary election in Providence, Rhode 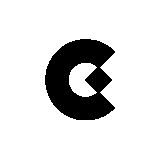