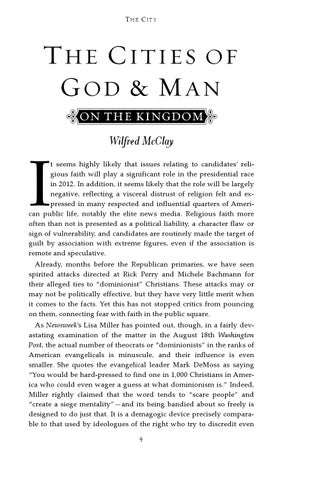 t seems  highly  likely  that  issues  relating  to  candidates’  reli‐ gious  faith will  play  a significant  role  in  the  presidential  race  in 2012. In addition, it seems likely that the role will be largely  negative,  reflecting  a  visceral  distrust  of  religion  felt  and  ex‐ pressed  in many  respected  and  influential  quarters  of Ameri‐ can  public  life,  notably  the  elite  news  media.  Religious  faith  more  often than not is presented as a political liability, a character flaw or  sign of vulnerability, and candidates are routinely made the target of  guilt  by  association  with  extreme  figures,  even  if  the  association  is  remote and speculative.   Already,  months  before  the  Republican  primaries,  we  have  seen  spirited  attacks  directed  at  Rick  Perry  and  Michele  Bachmann  for  their  alleged  ties  to  “dominionist”  Christians.  These  attacks  may  or  may not be politically effective, but they have very little merit when  it  comes  to  the  facts.  Yet  this  has  not  stopped  critics  from  pouncing  on them, connecting fear with faith in the public square.  As Newsweek’s Lisa Miller has pointed out, though, in a fairly dev‐ astating  examination  of  the  matter  in  the  August  18th  Washington  Post, the actual number of theocrats or “dominionists” in the ranks of  American  evangelicals  is  minuscule,  and  their  influence  is  even  smaller.  She  quotes  the  evangelical  leader  Mark  DeMoss  as  saying  “You would be hard‐pressed to find one in 1,000 Christians in Amer‐ ica who could even wager a guess at what dominionism is.” Indeed,  Miller  rightly  claimed  that  the  word  tends  to  “scare  people”  and  “create  a  siege  mentality”—and  its  being  bandied  about  so  freely  is  designed to do just that. It is a demagogic device precisely compara‐ ble to that used by ideologues of the right who try to discredit even  4