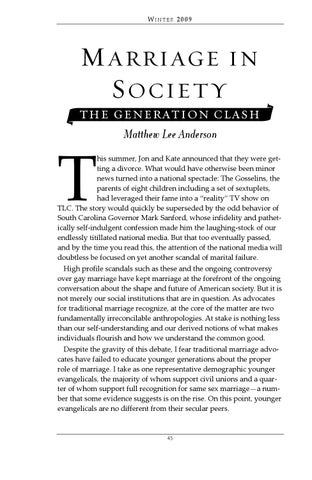 his summer, Jon and Kate announced that they were getting a divorce. What would have otherwise been minor news turned into a national spectacle: The Gosselins, the parents of eight children including a set of sextuplets, had leveraged their fame into a â&#x20AC;&#x153;realityâ&#x20AC;? TV show on TLC. The story would quickly be superseded by the odd behavior of South Carolina Governor Mark Sanford, whose infidelity and pathetically self-indulgent confession made him the laughing-stock of our endlessly titillated national media. But that too eventually passed, and by the time you read this, the attention of the national media will doubtless be focused on yet another scandal of marital failure. High profile scandals such as these and the ongoing controversy over gay marriage have kept marriage at the forefront of the ongoing conversation about the shape and future of American society. But it is not merely our social institutions that are in question. As advocates for traditional marriage recognize, at the core of the matter are two fundamentally irreconcilable anthropologies. At stake is nothing less than our self-understanding and our derived notions of what makes individuals flourish and how we understand the common good. Despite the gravity of this debate, I fear traditional marriage advocates have failed to educate younger generations about the proper role of marriage. I take as one representative demographic younger evangelicals, the majority of whom support civil unions and a quarter of whom support full recognition for same sex marriageâ&#x20AC;&#x201D;a number that some evidence suggests is on the rise. On this point, younger evangelicals are no different from their secular peers.

The City: Winter 2009 edition, a publication of Houston Baptist University

The City: Winter 2009 edition, a publication of Houston Baptist University