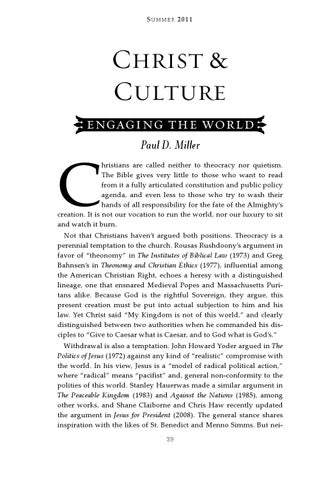 hristians are  called  neither  to  theocracy  nor  quietism.  The  Bible  gives  very  little  to  those  who  want  to  read  from it a fully articulated constitution and public policy  agenda,  and  even  less  to  those  who  try  to  wash  their  hands of all responsibility for the fate of the Almighty’s  creation. It is not our vocation to run the world, nor our luxury to sit  and watch it burn.  Not  that  Christians  haven’t  argued  both  positions.  Theocracy  is  a  perennial temptation to the church. Rousas Rushdoony’s argument in  favor of “theonomy” in The Institutes of Biblical Law (1973) and Greg  Bahnsen’s  in  Theonomy  and  Christian  Ethics  (1977),  influential  among  the American  Christian  Right,  echoes  a  heresy  with  a  distinguished  lineage,  one  that  ensnared  Medieval  Popes  and  Massachusetts  Puri‐ tans  alike.  Because  God  is  the  rightful  Sovereign,  they  argue,  this  present  creation  must  be  put  into  actual  subjection  to  him  and  his  law. Yet Christ said “My Kingdom is not of this world,” and clearly  distinguished between two authorities when he commanded his dis‐ ciples to “Give to Caesar what is Caesar, and to God what is God’s.”  Withdrawal is also a temptation. John Howard Yoder argued in The  Politics of Jesus (1972) against any kind of “realistic” compromise with  the world. In his view,  Jesus is a “model of radical political action,”  where “radical” means “pacifist” and, general non‐conformity to the  polities of this world. Stanley Hauerwas made a similar argument in  The  Peaceable  Kingdom  (1983)  and  Against  the  Nations  (1985),  among  other  works,  and  Shane  Claiborne  and  Chris  Haw  recently  updated  the  argument  in  Jesus  for  President  (2008).  The  general  stance  shares  inspiration with the likes of St. Benedict and Menno Simms. But nei‐ 39