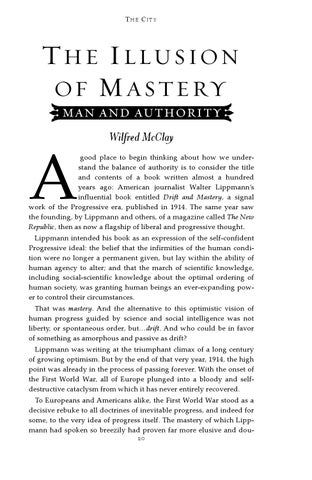 good place to begin thinking about how we understand the balance of authority is to consider the title and contents of a book written almost a hundred years ago: American journalist Walter Lippmannâ&#x20AC;&#x2122;s influential book entitled Drift and Mastery, a signal work of the Progressive era, published in 1914. The same year saw the founding, by Lippmann and others, of a magazine called The New Republic, then as now a flagship of liberal and progressive thought. Lippmann intended his book as an expression of the self-confident Progressive ideal: the belief that the infirmities of the human condition were no longer a permanent given, but lay within the ability of human agency to alter; and that the march of scientific knowledge, including social-scientific knowledge about the optimal ordering of human society, was granting human beings an ever-expanding power to control their circumstances. That was mastery. And the alternative to this optimistic vision of human progress guided by science and social intelligence was not liberty, or spontaneous order, but<drift. And who could be in favor of something as amorphous and passive as drift? Lippmann was writing at the triumphant climax of a long century of growing optimism. But by the end of that very year, 1914, the high point was already in the process of passing forever. With the onset of the First World War, all of Europe plunged into a bloody and selfdestructive cataclysm from which it has never entirely recovered. To Europeans and Americans alike, the First World War stood as a decisive rebuke to all doctrines of inevitable progress, and indeed for some, to the very idea of progress itself. The mastery of which Lippmann had spoken so breezily had proven far more elusive and dou20

The City: Spring 2011 edition, a publication of Houston Baptist University

The City: Spring 2011 edition, a publication of Houston Baptist University