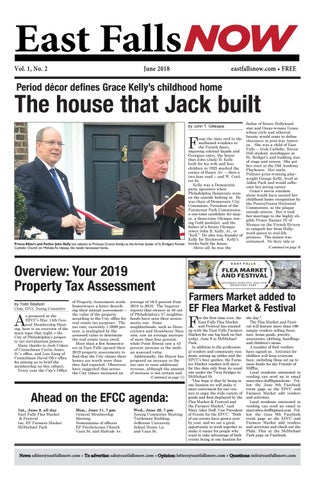 The house that Jack built father of future Hollywood star and Oscar-winner Grace, whose style and ethereal beauty would come to define rom the slate roof to the classiness in post-war Amerimullioned windows to ca. She was a child of East the French doors, Falls -- Irish Catholic, Raven imposing colonial façade and Hill student, worshipper at Georgian entry, the house St. Bridget’s and budding star that John (Jack) B. Kelly of stage and screen. She got built for his wife and four her start at the Old Academy children in 1925 marked the Playhouse. Her uncle, corner of Henry Av. -- then a Pulitzer prize-winning playtwo-lane road -- and W. Coul- wright George Kelly, lived at ter St. Alden Park and would influKelly was a Democratic ence her acting career. party operative when Grace’s movie stardom Philadelphia Democrats were alone would have earned her on the outside looking in. He childhood home recognition by was chair of Democratic City the Pennsylvania Historical Committee, President of the Commission, as the plaque Fairmount Park Commission, outside attests. But it took a one-time candidate for may- her marriage to the highly elior, a three-time Olympic row- gible Prince Rainier III of ing Gold medalist, and the Monaco on the French Riviera father of a future Olympic to catapult her from Hollyrower John B. Kelly, Jr., or wood queen to real-life “Kell.” He also was founder of princess. The nation was Kelly for Brickwork. Kelly’s entranced. No fairy tale or Prince Albert and Father John Kelly (no relation to Princess Grace’s family) as the former leader of St. Bridget’s Roman bricks built the house. (Continued on page 9) Above all, he was the Catholic Church on Midvale Av. blesses the newly renovated home.

s promised at the EFCC’s May 14th General Membership Meeting, here is an overview of the main topic that night – the City of Philadelphia’s property tax reevaluation process. Many thanks to Josh Cohen of Councilman Curtis Jones, Jr.’s office, and Lois Kang of Councilman David Oh’s office for joining us to brief the membership on this subject. Every year the City’s Office

of Property Assessment sends homeowners a letter describing their annual assessment -the value of the property according to the City office for real estate tax purposes. The tax rate, currently 1.3998 percent, is multiplied by the assessed value to determine the real estate taxes owed. More than a few homeowners in East Falls opened their 2019 property assessments to find that the City claims their homes are worth more than they had expected. Observers have suggested that across the City values increased an

average of 10.5 percent from 2018 to 2019. The Inquirer reports that owners in 48 out of Philadelphia’s 57 neighborhoods have seen their assessments rise. Some neighborhoods, such as Brewerytown and Strawberry Mansion, saw an average increase of more than four percent, while Point Breeze saw a 43 percent increase in the median assessed value. Additionally, the Mayor has proposed an increase in the tax rate to raise additional revenue, although the amount of increase is not certain and (Continued on page 11)

or the first time ever, the East Falls Flea Market and Festival has teamed up with the East Falls Farmers Market for one big bash on Saturday, June 9 in McMichael Park. In addition to the professional vendors and community residents setting up tables and the EFCC’s beer garden, the Farmers Market vendors will move for this date only from its usual site under the Twin Bridges to McMichael St. “Our hope is that by being in one location we will make it more convenient for our visitors to enjoy the wide variety of goods and food displayed by the Flea Market &amp; Festival and the Farmers Market,” said Mary Alice Duff, Vice President of Events for the EFCC. “Both of our events have grown year by year, and we see a great opportunity to work together to make it easier for people who want to take advantage of both events being in one location for