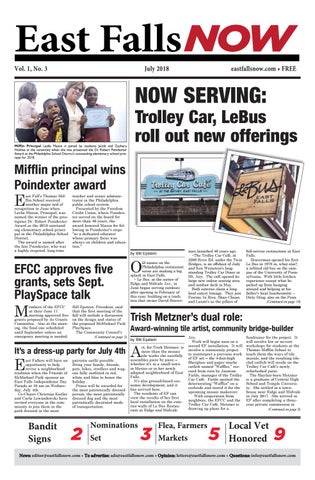 NOW SERVING: Mifflin Principal Leslie Mason is joined by students Jacob and Zachery Holmes at the ceremony when she was presented the Dr. Robert Poindexter Award as the Philadelphia School District’s outstanding elementary school principal for 2018.

ast Fall’s Thomas Mifflin School received another major nod of recognition in June when Leslie Mason, Principal, was named the winner of the prestigious Dr. Robert Poindexter Award as the 2018 outstanding elementary school principal in the Philadelphia School District. The award is named after the late Poindexter, who was a highly respcted, long-time

teacher and senior administrator in the Philadelphia public school system. Presented by the Freedom Credit Union, where Poindexter served on the board for more than 40 years, the award honored Mason for following in Poindexter’s steps “as a dedicated educator whose primary focus was always on children and education.”

embers of the EFCC at their June 11 meeting approved five grants proposed by its Grants Committee. Also at the meeting, the final one scheduled until September unless an emergency meeting is needed,

Bill Epstein, President, said that the first meeting of the fall will include a discussion on the design and status of the proposed McMichael Park PlaySpace. The Community Council’s (Continued on page 3)

ast Fallers will have an opportunity to help revive a neighborhood tradition when the Friends of McMichael Park sponsor an East Falls Independence Day Parade at 10 am on Wednesday, July 4th. Co-Chairs Christina Kistler and Carla Lewandowski have invited everyone in the community to join them in the park dressed in the most

ld names on the Philadelphia restaurant scene are making a big splash in East Falls. • Le Bus, at the corner of Ridge and Midvale Avs., in June began serving outdoors after opening in February of this year, building on a tradition that owner David Braver-

man launched 40 years ago. •The Trolley Car Café, at 3269 River Rd. under the Twin Bridges, is an offshoot of Judy and Ken Weinstein’s longstanding Trolley Car Diner in Mt. Airy. The café opened its large new indoor seating area and outdoor deck in May. Both eateries claim a long local eatery lineage. They join Fiorino, In Riva, Shan Chuan and Laxmi’s as the pillars of

full-service restaurants in East Falls. Braverman opened his first Le Bus in 1978 in, what else?, a refitted old bus on the campus of the University of Pennsylvania. With little kitchen experience except what he picked up from hanging around and helping at his father’s local luncheonette -Dirty Drug, also on the Penn (Continued on page 10)

rt, for Trish Metzner, is more than the mosaic tile works she carefully assembles piece by piece – whether it’s in a small town in Mexico or in her newly adopted neighborhood of East Falls. It’s also ground-based economic development, and it has arrived here. The residents of EF can view the results of her first local installation on the exterior walls of Le Bus Restaurant at Ridge and Midvale

Avs. Work will begin soon on a second EF installation. It will involve a community project to reinterpret a previous work of EF art – the 4-foot-high fiberglass and paper mache catfish named “Waffles,” rescued from ruin by Jasmine Fields, manager of the Trolley Car Café. Fields spotted the deteriorating “Waffles” on a curbside and stored it for the upcoming mosaic makeover. With cooperation from neighbors, the EFCC and the Trolley Car Café, Metzner is drawing up plans for a

fundraiser for the project. It will involve low or no-cost workshops for students at the Thomas Mifflin School to teach them the ways of tile murals, and the resulting tileclad catfish will reside on the Trolley Car Café’s newly refurbished patio. The Mayfair-born Metzner is a graduate of Central High School and Temple University. She settled in a townhouse near Ridge and Midvale in July 2017. She arrived in EF after completing a threeyear private commission in (Continued on page 8)