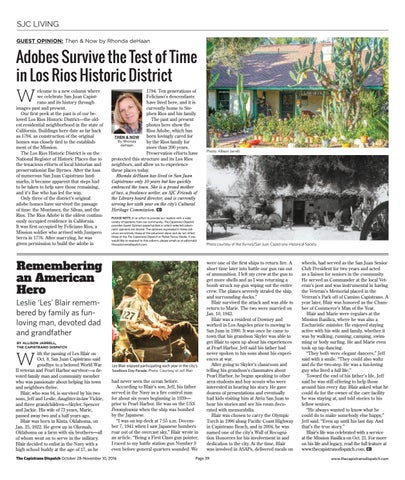 elcome to a new column where we celebrate San Juan Capistrano and its history through images past and present. Our first peek at the past is of our beloved Los Rios Historic District—the oldest residential neighborhood in the state of California. Buildings here date as far back as 1794, as construction of the original homes was closely tied to the establishment of the Mission. The Los Rios Historic District is on the National Register of Historic Places due to the tenacious efforts of local historian and preservationist Ilse Byrnes. After the loss of numerous San Juan Capistrano landmarks, it became apparent that steps had to be taken to help save those remaining, and it’s Ilse who has led the way. Only three of the district’s original adobe homes have survived the passage of time: the Montanez, the Silvas, and the Rios. The Rios Adobe is the oldest continuously occupied residence in California. It was first occupied by Feliciano Rios, a Mission soldier who arrived with Junípero Serra in 1776. After marrying, he was given permission to build the adobe in

1794. Ten generations of Feliciano’s descendants have lived here, and it is currently home to Stephen Rios and his family. The past and present photos here show the Rios Adobe, which has been lovingly cared for THEN &amp; NOW By Rhonda by the Rios family for deHaan more than 200 years. Preservation efforts have protected this structure and its Los Rios neighbors, and allow us to experience these places today. Rhonda deHaan has lived in San Juan Capistrano only 10 years but has quickly embraced the town. She is a proud mother of two, a freelance writer, an SJC Friends of the Library board director, and is currently serving her sixth year on the city’s Cultural Heritage Commission. CD PLEASE NOTE: In an effort to provide our readers with a wide variety of opinions from our community, The Capistrano Dispatch provides Guest Opinion opportunities in which selected columnists’ opinions are shared. The opinions expressed in these columns are entirely those of the columnist alone and do not reflect those of the The Capistrano Dispatch or Picket Fence Media. If you would like to respond to this column, please email us at editorial@ thecapistranodispatch.com.

ith the passing of Les Blair on Oct. 8, San Juan Capistrano said goodbye to a beloved World War II veteran and Pearl Harbor survivor—a devoted family man and community member who was passionate about helping his town and neighbors thrive. Blair, who was 94, is survived by his two sons, Jeff and Leslie, daughter-in-law Vickie, and three grandchildren—Skyler, Spencer and Jackie. His wife of 73 years, Marie, passed away two and a half years ago. Blair was born in Kinta, Oklahoma, on Jan. 25, 1922. He grew up in Okemah, Oklahoma on a farm with six brothers—all of whom went on to serve in the military. Blair decided to enlist in the Navy with a high school buddy at the age of 17, as he

had never seen the ocean before. According to Blair’s son, Jeff, his father served in the Navy as a fire control man for about six years beginning in 1939— prior to Pearl Harbor. He was on the USS Pennsylvania when the ship was bombed by the Japanese. “I was on top deck at 7:55 a.m. December 7, 1941 when I saw Japanese bombers roar out of the overcast sky,” Blair wrote in an article. “Being a First Class gun pointer, I raced to my battle station gun Number 9 even before general quarters sounded. We

were one of the first ships to return fire. A short time later into battle our gun ran out of ammunition. I left my crew at the gun to get more shells and as I was returning a bomb struck my gun wiping out the entire crew. The planes severely strafed the ship and surrounding docks.” Blair survived the attack and was able to return to Marie. The two were married on Jan. 10, 1942. Blair was a resident of Downey and worked in Los Angeles prior to moving to San Juan in 1990. It was once he came to town that his grandson Skyler was able to get Blair to open up about his experiences at Pearl Harbor. Jeff said his father had never spoken to his sons about his experiences at war. After going to Skyler’s classroom and telling his grandson’s classmates about Pearl Harbor, he began speaking to other area students and boy scouts who were interested in hearing his story. He gave dozens of presentations and eventually had kids visiting him at Atria San Juan to hear his stories and see his room decorated with memorabilia. Blair was chosen to carry the Olympic Torch in 1996 along Pacific Coast Highway in Capistrano Beach, and in 2004, he was named one of the city’s Wall of Recognition Honorees for his involvement in and dedication to the city. At the time, Blair was involved in ASAPs, delivered meals on

wheels, had served as the San Juan Senior Club President for two years and acted as a liaison for seniors in the community. He served as Commander at the local Veteran’s post and was instrumental in having the Veteran’s Memorial placed in the Veteran’s Park off of Camino Capistrano. A year later, Blair was honored as the Chamber of Commerce’s Man of the Year. Blair and Marie were regulars at the Mission Basilica, where he was also a Eucharistic minister. He enjoyed staying active with his wife and family, whether it was by walking, running, camping, swimming or body surfing. He and Marie even took up tap dancing. “They both were elegant dancers,” Jeff said with a smile. “They could also waltz and do the two-step. He was a fun-loving guy who lived a full life.” Toward the end of his father’s life, Jeff said he was still offering to help those around him every day. Blair asked what he could do for the owner of the care facility he was staying at, and told stories to his fellow seniors. “He always wanted to know what he could do to make somebody else happy,” Jeff said. “Even up until his last day. And that’s the true story.” Blair’s life was celebrated with a service at the Mission Basilica on Oct. 21. For more on his life and legacy, read the full feature at www.thecapistranodispatch.com. CD www.thecapistranodispatch.com 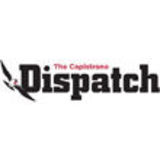 More from The Capistrano Dispatch