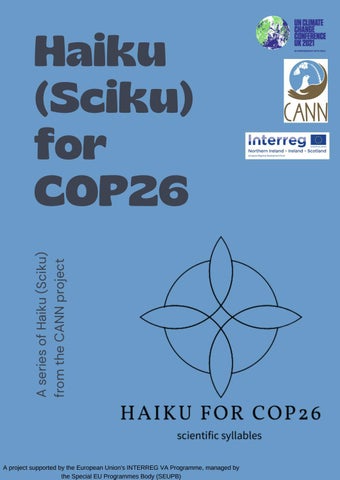 A series of Haiku (Sciku) from the CANN project

daily in the run up to COP26

About the CANN project

Scientific Syllables What is a haiku? A haiku is a type of Japanese poem made up of 17 syllables (morae) in three phrases (5, 7, 5). Haiku traditionally tend to be associated with nature, have a seasonal reference (kigo) and contain images of juxtaposition with a cutting word between them (a kireji). Throughout both traditional and modern haiku these rules have all been broken (sometimes all at once). What is a Sciku? Sciku * is a portmanteau word for scientific haiku, the structure of haiku with science and mathematics as subjects. However, given haiku’s traditional association with the natural world, it isn’t an especially great leap to get to the scientific topics of sciku. Trying to obey traditional haiku rules and convey the essence of a scientific finding is tricky. So here we have followed ideas at The Sciku Project that is our inspiration, maintaining the 17 syllables and line structure but maybe not upholding the other traditional rules. *https://thescikuproject.com

The Arts have a huge role in communicating science to non-scientists and can be a valuable bridging tool in helping to interpret scientific principles. The Haiku or Sciku is short and sweet. Anyone can write one, but trying to distil scientific principles and messages into this most concise mode of communication brings a rigorous discipline to the work that appeals to scientists. Haiku&#39;s brevity is also ideal for Twitter with its strict character count, so the CANN project decided to celebrate COP26 by tweeting a Haiku-a-day on the subject of peat&#39;s role in combating climate change in the run-up to the meeting in November 2021. A brief explanation of the science behind the haiku was also given in 180 characters or less

Carbon storage varies by peatland but generally is 30–70kg of carbon/m3. Although technology is developing artificial methods of removing CO2 none of them support biodiversity at the same time

Piezo measuring the living blood of the bog Is it bleeding out?

Our piezometers measure the height of the water table on the bogs we manage and ultimately tell us how well our re-wetting is working. Water is the living heart of the bog.

Fires on bogs encourage the growth of firetolerant and even fire-stimulated plants that grow better following a fire. This change of vegetation is a permanent scar long after the ash has washed away.

A breath of carbon locked in living sphagnum safe for centuries

Sphagnum naturally produces phenolic compounds that slow the decomposition of the plants that make up peat. Preventing peat decomposition will help keep the carbon it holds locked away.

Sphagnum mosses can soak up more than eight times their own weight in water. They hold this water and slowly release it in quantities that rivers can cope with, without bursting their banks. y

Rewetting might mean A short sharp shock of methane

but much less carbon

Rewetting CO 2 emissions, but CH4 emission: a weak persistent effect from CO2 vs a strong but short-lived effect of CH4 . But in the long term rewetting reduces overall GHGs. Warnings of CH4 emissions from rewetting are unjustified.

Homeostasis Liquids, solids and gasses Bogs are in balance

Some think that bogs resist external change but can then abruptly transition from one state to another. These sudden changes may have significant effects on the global carbon cycle and climate system

Wildfires not only give off GHGs but change the surface of the earth from a high albedo (heat reflecting ) green to low albedo (heat absorbing) black, multiplying the global warming impact of the atmospheric CO2

A raised bog often has a water table perched higher than the surrounding land, which can be hard to understand unless you visualise it as a water droplet perched on the land. It is delicately balanced, and that balance can shift.

If bogs can preserve butter, boats, even bodies, carbon is easy

The highly acidic peat acts as a remarkable preservative, leaving the clothing and skin intact, and creating poignant and memorable images of people of the past. Carbon trapped in plants is preserved in the same way.

In a system, change in the outputs can loop back to the inputs. This may dampen the initial change (-ve feedback) or amplify it (+ve feedback). Human impact on bogs worryingly, is leading to a +ve climatic feedback loop

67% of Irish drinking water comes from peatland catchments. Unstable peat can collapse in a bog-burst affecting water quality and causing extensive fish-kills in nearby rivers. Peat is locally as well as globally important

Ammonia spread on land, but some gets airborne

It is not just drying that threatens our bogs, and ultimately, their capacity to catch carbon. Airborne pollutants like ammonia from fertiliser damage our bogs. We are monitoring many of our bogs for ammonia which can kill sphagnum.

When the peat at the bottom of this core was laid down 6000 years ago, CO2 levels in the atmosphere were 220ppm. This May, levels of 420ppm were recorded for the first time ever.

We are not just farming carbon. Rewetted land can be productive. Paludiculture can save money, benefit farmers and society, as well as absorbing carbon. This could be the future.

The smoky flavour of peat reek comes from chemicals in Islay Peat which is richer in phenols, guaiacol, vanillics and nitrogen but poorer in carbohydrates due to more sphagnum and less woody material than mainland bogs

Peat is mostly water, when you remove that water through drainage, the land subsides and gets lower, making it more vulnerable to flooding This is especially important in lowland and coastal peat soils.

Carbon flows into the lungs of fen, pool and mire oxygen breathed out

Carbon is locked up effectively in other habitats too. Lowland fens and mires are significant sinks too and are under even greater threat from damage as they are often surrounded by valuable arable land

The pollen grains of every plant are unique and their walls of sporopellenin are tough and can last thousands of years in peat. We can tell which plants grew when and map past climate change in peat.

‘Global warming’ is too gentle a phrase, the change in temperatures could disrupt ocean currents, triggering abrupt cooling, a &quot;carbon winter&quot; in Europe. No amount of burning turf will keep us warm then. Keep the carbon locked up

To keep our bog-building, carbon-catching sphagnum growing actively, water levels must be kept within 10cm of the surface for at least 90% of the year.

From the Essex marshes of Dickens to the peat diggings of Seamus Heaney, our wet places have called to wordsmiths. Scientists and campaigners need to use a lexicon of poetic inspiration not just figures and graphs to provoke change

Across the world, peat covers just 3% of the land’s surface, but stores one-third of the Earth’s soil carbon, not just a sticking plaster, but potentially a cure for what ails us. If we care for it, it will care for us

People have used wetland plants for medicinal purposes for thousands of years. Today globally we use 50,000 to 70,000 species of higher plants medicinally. If we care for them, our wetlands could be our future pharmacopeia.

Light-weight, agile and tough, flourishing on coarse grasses, Dexter cows are one of the traditional rare breeds using for conservation grazing of upland blanket bogs. Support for farmers to sustainably graze their land is vital.

Shinrin Yoku is the Japanese art of relaxing forest bathing. Being outdoors, whether in forest or bog, is good for mind, body and soul. Being in nature reduces anger, fear, stress and the cortisone hormones that go with these emotions

A study showed that one year following re-vegetation, the magnitude of the avoided loss of carbon from areas of bare peat will be 37 times that of the GHG emissions produced through undertaking the work, including use of helicopters.

Peat has played an historic role in Ireland’s economy and culture, but this highly carboninefficient fuel has no role in the future if we want to lower our 13T per head annual GHG output

Are Sci-ku for you? poetry and science melds to change hearts and minds

This is the last of our madcap tour through our peaty Sci-ku (Haiku for Scientists) in the run up to the UN Climate Change Conference. We hope you enjoyed their slight twist on peatland science and climate messages

Peatland scientists Sharing wisdom of water Bogs, you are complex

Why is moss squishy? Because it’s full of water In barrel-shaped cells

What is The CANN Project The CANN project is a cross-border environment project which aims to improve the condition of protected habitats and to support priority species found within Northern Ireland, the Border Region of Ireland and Scotland, allowing the region to meet key EU biodiversity targets and ensuring the future of these internationally important habitats and species. With €9.4 million of funding from the INTERREG VA programme the CANN project team will produce Conservation Action Plans for a range of sites across the jurisdictions which are designated as Special Areas of Conservation (SACs) and accumulatively account for over 25,000 hectares of land. Direct conservation actions will be carried out on 3,650 hectares of these SACs, all with an aim to help and guide the habitats and species found at these sites towards a favourable conservation status. Made up of leading government departments, local authorities, research institutions and charities from across the three jurisdictions, the CANN project team works together with local communities and stakeholders towards a common goal of improving the environmental condition of these SACs. This includes delivering educational and outreach programmes and raising awareness of the significance of the habitats and species found on the sites, with the aspiration of safeguarding the conservation of these key sites and ensuring their sustainability beyond 2022 and the lifespan of the CANN project.

Contact Us Newry, Mourne and Down District Council lead partner the CANN project Monaghan Row Newry, CoDown BT35 8DJ 077 08510344 www.the CANNproject.org All Haiku in this booklet (unless credited to others) were written by Abby McSherry, comms and outreach officer with the CANN project

The Arts have a huge role in communicating science to non-scientists and can be a valuable bridging tool in helping to interpret scientific principles. The Haiku or Sciku is short and sweet. Anyone can write one, but trying to distil scientific principles and messages into this most concise mode of communication brings a rigorous discipline to the work that appeals to scientists. This series of Haiku or Sciku were written by the CANN project and published on Twitter in the run-up to COP 26 in November 2021, to celebrate the impact healthy peatlands can have on climate change