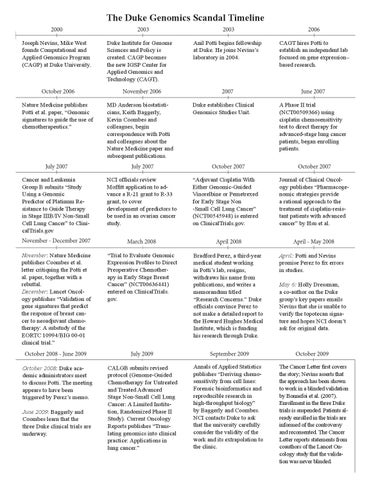 NCI officials review Moffitt application to advance a R-21 grant to R-33 grant, to cover development of predictors to be used in an ovarian cancer study.

Bradford Perez, a third-year medical student working in Potti’s lab, resigns, withdraws his name from publications, and writes a memorandum titled “Research Concerns.” Duke officials convince Perez to not make a detailed report to the Howard Hughes Medical Institute, which is funding his research through Duke.

Annals of Applied Statistics publishes “Deriving chemosensitivity from cell lines: Forensic bioinformatics and reproducible research in high-throughput biology” by Baggerly and Coombes. NCI contacts Duke to ask that the university carefully consider the validity of the work and its extrapolation to the clinic.

The Cancer Letter first covers the story; Nevins asserts that the approach has been shown to work in a blinded validation by Bonnefoi et al. (2007). Enrollment in the three Duke trials is suspended. Patients already enrolled in the trials are informed of the controversy and reconsented. The Cancer Letter reports statements from coauthors of the Lancet Oncology study that the validation was never blinded.

October 2008: Duke academic administrators meet to discuss Potti. The meeting appears to have been triggered by Perez’s memo. June 2009: Baggerly and Coombes learn that the three Duke clinical trials are underway.

May 6: Holly Dressman, a co-author on the Duke group’s key papers emails Nevins that she is unable to verify the topotecan signature and hopes NCI doesn’t ask for original data.

Moffitt stops its ovarian cancer trial, two days after Duke officials suspended two of their single-institution trials. While those trials were resumed after a cursory review, the Moffitt trial was stopped for good.

Baggerly sends a report highlighting problems with data posted on a webpage on the cisplatin and pemetrexed tests to Kornbluth at Duke. This report was shared with Nevins, who asked that it be withheld from the external reviewers; Duke leadership decided to honor Nevins’ request.

December 2009 External reviewers find that, “In summary, we believe the predictors are scientifically valid and with a few additions can be fully responsive to the comments of Baggerly and Coombes.”

NCI completes reevaluation of supporting data for the CALGB-30506 trial.

Nevins et al. send a letter to McShane in response to some of her concerns about the LMS used in CALGB-30506. McShane and Abrams reply with the conclusions of their analysis of the LMS in the clinical trial: The test should not remain as a stratification factor, and the coprimary aim to evaluate its performance should be removed from the study.

The Cancer Letter obtains a copy of Duke University’s external review report from NCI via a Freedom of Information Act request and publishes the document.

NCI completes reevaluation of the cisplatin chemosensitivity test. NCI hosts Duke researchers to discuss the gene expression–based tests developed at Duke. NCI states that it is not satisfied, and directs Potti and Nevins to conduct a search of their labs to supply the data and code reproducing the results in Hsu et al. (2007) and justifying the trials under way.

The Cancer Letter reports that Anil Potti incorrectly stated his credentials. Duke places Potti on administrative leave while the University investigates allegations of inaccuracies in his CV and in the research.

Thirty-one biostatisticians and bioinformatics experts from around the world send a letter, “Concerns about prediction models used in Duke clinical trials,” to NCI director Harold Varmus.

Lancet Oncology issues an expression of concern for “Validation of gene signatures that predict the response of breast cancer to neoadjuvant chemotherapy.” Duke suspends trials for a second time.

NCI and Duke request assistance from the Institute of Medicine in assessing the scientific foundation of the three clinical trials and identifying appropriate evaluation criteria for future tests based on omics technologies.

Oct. 22, 2010 Duke officials inform NCI that they have determined that several datasets reported to have been used to validate the cisplatin test were found to be flawed. The Hsu et al. (2007) paper would be retracted. Investigation into other datasets was ongoing.

December 2010 McShane describes to the IOM committee the NCI interactions with the Duke investigators pertaining to the gene expression– based tests, and supplies documentation to the committee. She reveals that NCI had discovered that it had been providing partial funding to the trial NCT00509366 through an R01 grant awarded to Anil Potti. She describes her unsuccessful attempts to reproduce the results reported in the Hsu et al. (2007) paper for the cisplatin test and how that eventually led to discovery of several corrupted datasets.

July 2011 Duke sends the IOM committee a list of identified problems, missed signals, and proposed solutions based on the work of the TMQF committee.

Anil Potti resigns from his position at Duke, later taking a position as an oncologist in South Carolina with strong endorsement from some Duke faculty members.

NEJM retraction (Potti et al., 2011b). Draft document, A framework for the quality of translational medicine with a focus on human genomic studies: Principles from the Duke Medicine Translational Medicine Quality Framework committee, released. Final draft is released in May 2011.

Duke representatives meet with the IOM committee: Robert Califf, Sally Kornbluth, Michael Cuffe, Ross McKinney, John Falletta, Geoff Ginsburg, Michael Kelley, and William Barry. Dzau does not attend the session, citing prior commitments. Duke representatives do not turn over Perez memo and emails to IOM. Officials state that Duke has a “culture of openness” and that there are no whistleblowers.

FDA posts documents on its website indicating that it informed Duke in 2009 that an IDE should have been obtained for the three trials. Journal of Clinical Oncology retracts “An integrated genomic-based approach to individualized treatment of patients with advanced-stage ovarian cancer.”

NCI publishes a checklist for advancing omics studies to the clinic.

Nevins leaves Duke. It is not publicly known whether an internal misconduct investigation stemming from the scandal is related to his retirement.

Attorneys for Duke argue that no patients were harmed, in defending against a suit claiming negligence, breach of fiduciary duty, unjust enrichment, infliction of emotional distress, loss of chance, battery, deceptive trade practices, civil conspiracy and obstruction of justice.

May 2015 Duke settles suits filed by patients enrolled in the genomics trials. The terms of the settlement are confidential.

This timeline is adapted from The Cancer Letter archives and the 2012 Institute of Medicine report, “Evolution of Translational Omics: Lessons Learned and the Path Forward.”

Moffitt stops its ovarian cancer trial, two days after Duke officials suspended two of their single-institution trials. While those trials were resumed after a cursory review, the Moffitt trial was stopped for good.

Baggerly sends a report highlighting problems with data posted on a webpage on the cisplatin and pemetrexed tests to Kornbluth at Duke. This report was shared with Nevins, who asked that it be withheld from the external reviewers; Duke leadership decided to honor Nevinsâ&#x20AC;&#x2122; request. 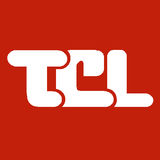