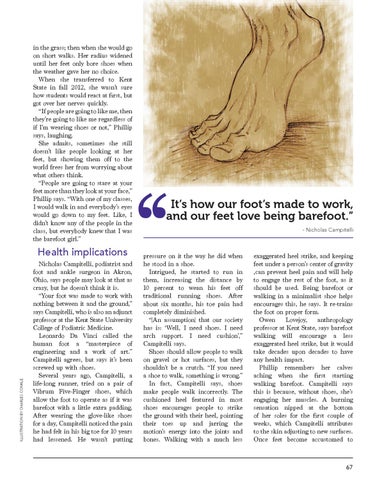 in the grass; then when she would go on short walks. Her radius widened until her feet only bore shoes when the weather gave her no choice. When she transferred to Kent State in fall 2012, she wasn’t sure how students would react at first, but got over her nerves quickly. “If people are going to like me, then they’re going to like me regardless of if I’m wearing shoes or not,” Phillip says, laughing. She admits, sometimes she still doesn’t like people looking at her feet, but showing them off to the world frees her from worrying about what others think. “People are going to stare at your feet more than they look at your face,” Phillip says. “With one of my classes, I would walk in and everybody’s eyes would go down to my feet. Like, I didn’t know any of the people in the class, but everybody knew that I was the barefoot girl.”

Nicholas Campitelli, podiatrist and foot and ankle surgeon in Akron, Ohio, says people may look at that as crazy, but he doesn’t think it is. “Your foot was made to work with nothing between it and the ground,” says Campitelli, who is also an adjunct professor at the Kent State University College of Podiatric Medicine. Leonardo Da Vinci called the human foot a “masterpiece of engineering and a work of art.” Campitelli agrees, but says it’s been screwed up with shoes. Several years ago, Campitelli, a life-long runner, tried on a pair of Vibrum Five-Finger shoes, which allow the foot to operate as if it was barefoot with a little extra padding. After wearing the glove-like shoes for a day, Campitelli noticed the pain he had felt in his big toe for 10 years had lessened. He wasn’t putting

It’s how our foot’s made to work, and our feet love being barefoot.” - Nicholas Campitelli

pressure on it the way he did when he stood in a shoe. Intrigued, he started to run in them, increasing the distance by 10 percent to wean his feet off traditional running shoes. After about six months, his toe pain had completely diminished. “[An assumption] that our society has is: ‘Well, I need shoes. I need arch support. I need cushion’,” Campitelli says. Shoes should allow people to walk on gravel or hot surfaces, but they shouldn’t be a crutch. “If you need a shoe to walk, something is wrong.” In fact, Campitelli says, shoes make people walk incorrectly. The cushioned heel featured in most shoes encourages people to strike the ground with their heel, pointing their toes up and jarring the motion’s energy into the joints and bones. Walking with a much less

exaggerated heel strike, and keeping feet under a person’s center of gravity ,can prevent heel pain and will help to engage the rest of the foot, as it should be used. Being barefoot or walking in a minimalist shoe helps encourages this, he says. It re-trains the foot on proper form. Owen Lovejoy, anthropology professor at Kent State, says barefoot walking will encourage a less exaggerated heel strike, but it would take decades upon decades to have any health impact. Phillip remembers her calves aching when she first starting walking barefoot. Campitelli says this is because, without shoes, she’s engaging her muscles. A burning sensation nipped at the bottom of her soles for the first couple of weeks, which Campitelli attributes to the skin adjusting to new surfaces. Once feet become accustomed to

"The Return of Paul Haynes | The Downtown Issue" 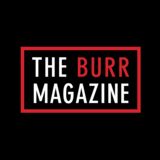