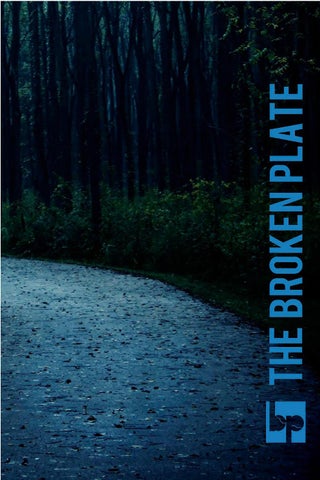 Hello, you gods of country roads, rumbling echoes of engines in empty fields. Your arms dangling from windows; your hats frayed and faded, threadbare. Used tins of Skoal clatter in cupholders, and sunglasses hang from the mirror where you watch the empty and crushed cans â&amp;#x20AC;&amp;#x201D; Mountain Dew, Mr. Pibb pirouette in the truckâ&amp;#x20AC;&amp;#x2122;s bed.

Demise of a Marble Kelsey Englert When the marbles swirled in the dry frying pan, they sounded like the ice cubes that clinked in Father’s glass each night. My mother stirred the marbles with a wooden spoon, concentration pinched in the lines around her mouth. They were always blue and there were always twenty-four. This was either because of my mother’s superstitions or because the craft store in our town only sold bags of two dozen translucent blue marbles. When we were young and too short, my little brother and I would work together to drag a chair from the kitchen table to the stove and climb up for a better view. Sometimes he would reach out to grip the stove, and I’d smack his hand down and remind him that was danger. Mother never noticed. Count them, she’d say, and then swoosh them so fast with the spoon that they became a blur, a whirlpool of glass. My brother would recite the numbers from one to twenty-four as fast as he could, and burst into laughter while I stepped a little in front of him in case one of the frying marbles shot out of the pan. They never did. Mother’s focus kept them down. Even though there wasn’t a smell, or smoke, Mother knew when they had been fried enough. She’d chase a marble around the pan with the wooden spoon like the cranky man who wore the apron at the pet store chased the goldfish with a net. When a marble stilled in the middle of the spoon, she’d tilt the spoon, dropping the sphere on top of an awaiting ice cube. It would melt its way toward the core. We would all lean in and my brother would say, Be ready. Mother had told us this the first time we ever fried marbles, because she knew it would happen so fast that we would miss it if we weren’t warned. Each time after that, my brother said it. No sooner than he spoke the words, the spider web of cracks would run through the inside of the marble. Mother said it was okay to break its insides, because it was still a perfectly good marble on the outside, and the breaks made it pretty. That was so true. The melted hole in the ice cube held the marble. The water made it slick, and Mother would stroke her finger against the globe, sending it into rotation. My brother and I would each get to drop five fried marbles into ice 28

cubes. Then Mother angled the pan and let the rest plunk in a glass of ice water. We’d stare into it and watch them sink. This is like when we pour the goldfish into the toilet, my brother reminded us. Every so often, one marble that was heated a little too long and created a little too weak would shatter. It was always disappointing. Mother would set the pan on a cool burner and put a strainer over the drain. My brother and I would haul our chair over to the sink and spill the marbles into the strainer where they piled like fish eggs. He’d bury his hand in and spin the marbles around while I got a paper towel. Once I laid it on top of the marbles, he always had to thrust his chubby hand under my own and pat them dry himself. The first time we ever fried a batch, Mother told us to add them to our collection of fancy marbles Father had given us after he and Mother went to the hospital and came home sad. We dropped them all on the ringed rug we liked to play on and my brother took the first shot. He missed, which wasn’t unusual. I rested my shooter marble between my curled thumb and index finger and lowered my hand to the ground. After taking aim on one of our freshly fried marbles, I fired. The large marble left my finger at a satisfying speed and rolled over the bumps in the rug. It struck the fried marble, shattering it. My brother threw his own shooter marble to the floor, a sure sign of an oncoming tantrum. Mother swooshed her hand through his dark brown hair and said she had a better idea. She picked up the twenty-three remaining fried marbles and walked us outside. After retrieving the square shovel from the shed, she led us on an adventure into our woods. I was cold without my jacket and hoped it wouldn’t take very long. We stopped at the doghouse to pay our respects, like Mother taught us. Father gave Sparky away to the Joneses because their kids were bigger and could take care of a dog. Mother objected, but Father told her she wasn’t fit for it at that time. My brother wanted to flush Sparky down the toilet rather than give him away, but Father scolded him, You don’t kill things. I killed the fish, my brother had said. No, my father corrected, they died. Mother began, I— Quiet, Maureen, and she was. She scraped the corner of the shovel’s blade into the dirt, making an X. Right here, she said. My brother got very excited because he had just learned that X marks the spot for pirate treasure. My mother said we would bury the 29

Demise of a Marble

marbles and someday, someone would come along and dig them up and know we were here, and we had beautiful, internally cracked marbles. She dug the hole and my brother filled it with the glass balls and fluffed dirt. I hated to see them go. He marked them with an X, but when he ran to find a stick for the pirate sword fight, I saw the toe of Motherâ&amp;#x20AC;&amp;#x2122;s shoe scrape it away. Each year in late September, Mother bought a bag of twenty-four blue marbles. We fried and buried them. Theyâ&amp;#x20AC;&amp;#x2122;ll know we were here, Mother always said.

Andrew House Okay, so there’s this top criminal profiler who gets kicked out of the FBI because he doesn’t play by the rules. He becomes a hobo and travels the country with his five-year-old son, who is psychic. They solve mysteries. Get this: there’s an ex-convict who murdered three people with a toothbrush, and he’s just escaped from San Quentin. He kidnaps a porn star named Strawberry Melons and flees to Tijuana. They solve mysteries. There’s also this guy and his dog. The man, ideally played by Dolph Lundgren, is an ex-military cop who owns a karate dojo. The dog can speak English, staccato-style, and knows how to drive an Aston Martin. They solve mysteries. What if country superstar Willie Nelson ditches the touring circuit and moves to Africa? There he meets a lion tamer named Nhamo whose village has been burned to the ground. Nhamo seeks revenge and rides an elephant. They solve mysteries.

Hereâ&amp;#x20AC;&amp;#x2122;s another idea: a retired action hero actor gets sick of all this shit and hikes into the desert. He takes along his daughter, pony-tailed and numb, and the two of them sit on the tallest rock they can see. For once, there is only the sound of their breathing. They solve mysteries.

Memories of the splendid Moorish palace float within a delicate tremolo of guitar strings— sunlight quivers on water, raindrops stutter against a windowpane, as the fourteenth-century castle of red emerges from the mists of Granada’s hills, where waters trickle through Gardens of Paradise, heavy with aromas of orange and rose, and where myrtle-lined pools embrace the sky near the fountain where twelve stone lions stand guard. Walls of curling Arabic script affirm, There is no conqueror but Allah. Shaping the wavering dream, Tárrega’s music celebrates the palace’s airy, lacelike masonry as it wafts to the honeycombed Dome of Heaven. “Memories of the Alhambra” sings to life a place where the physical kissed the sublime in notes that weep with loss— a place forever with us yet forever gone.