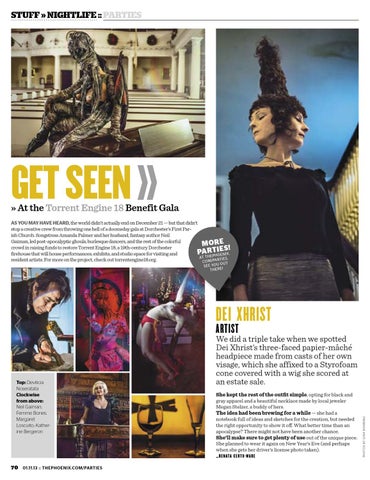 » At the Torrent Engine 18 Benefit Gala As you mAy hAve heArd, the world didn’t actually end on December 21 — but that didn’t stop a creative crew from throwing one hell of a doomsday gala at Dorchester’s First Parish Church. Songstress Amanda Palmer and her husband, fantasy author Neil Gaiman, led post-apocalyptic ghouls, burlesque dancers, and the rest of the colorful More crowd in raising funds to restore Torrent Engine 18, a 19th-century Dorchester tieensix!. patr firehouse that will house performances, exhibits, and studio space for visiting and ho At heP ties. r resident artists. For more on the project, check out torrentengine18.org. com/PA out see you t h e r e!

She kept the rest of the outfit simple, opting for black and gray apparel and a beautiful necklace made by local jeweler Megan Stelzer, a buddy of hers. The idea had been brewing for a while — she had a notebook full of ideas and sketches for the creation, but needed the right opportunity to show it off. What better time than an apocalypse? There might not have been another chance. She’ll make sure to get plenty of use out of the unique piece. She planned to wear it again on New Year’s Eve (and perhaps when she gets her driver’s license photo taken). _RENaTa CERTo-Wa RE

We did a triple take when we spotted Dei Xhrist’s three-faced papier-mâché headpiece made from casts of her own visage, which she affixed to a Styrofoam cone covered with a wig she scored at an estate sale.

Going meal for meal with Jamie Bissonnette in Hong Kong.