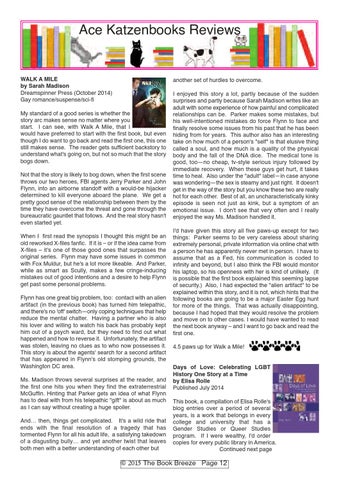 another set of hurdles to overcome.

My standard of a good series is whether the story arc makes sense no matter where you start. I can see, with Walk A Mile, that I would have preferred to start with the first book, but even though I do want to go back and read the first one, this one still makes sense. The reader gets sufficient backstory to understand what's going on, but not so much that the story bogs down.

Not that the story is likely to bog down, when the first scene throws our two heroes, FBI agents Jerry Parker and John Flynn, into an airborne standoff with a would-be hijacker determined to kill everyone aboard the plane. We get a pretty good sense of the relationship between them by the time they have overcome the threat and gone through the bureaucratic gauntlet that follows. And the real story hasn't even started yet. When I first read the synopsis I thought this might be an old reworked X-files fanfic. If it is – or if the idea came from X-files – it's one of those good ones that surpasses the original series. Flynn may have some issues in common with Fox Muldur, but he's a lot more likeable. And Parker, while as smart as Scully, makes a few cringe-inducing mistakes out of good intentions and a desire to help Flynn get past some personal problems.

Flynn has one great big problem, too: contact with an alien artifact (in the previous book) has turned him telepathic, and there's no 'off' switch—only coping techniques that help reduce the mental chatter. Having a partner who is also his lover and willing to watch his back has probably kept him out of a psych ward, but they need to find out what happened and how to reverse it. Unfortunately, the artifact was stolen, leaving no clues as to who now possesses it. This story is about the agents' search for a second artifact that has appeared in Flynn's old stomping grounds, the Washington DC area.

Ms. Madison throws several surprises at the reader, and the first one hits you when they find the extraterrestrial McGuffin. Hinting that Parker gets an idea of what Flynn has to deal with from his telepathic "gift" is about as much as I can say without creating a huge spoiler.

And… then, things get complicated. It's a wild ride that ends with the final resolution of a tragedy that has tormented Flynn for all his adult life, a satisfying takedown of a disgusting bully… and yet another twist that leaves both men with a better understanding of each other but

I enjoyed this story a lot, partly because of the sudden surprises and partly because Sarah Madison writes like an adult with some experience of how painful and complicated relationships can be. Parker makes some mistakes, but his well-intentioned mistakes do force Flynn to face and finally resolve some issues from his past that he has been hiding from for years. This author also has an interesting take on how much of a person's "self" is that elusive thing called a soul, and how much is a quality of the physical body and the fall of the DNA dice. The medical tone is good, too—no cheap, tv-style serious injury followed by immediate recovery. When these guys get hurt, it takes time to heal. Also under the "adult" label—in case anyone was wondering—the sex is steamy and just right. It doesn't get in the way of the story but you know these two are really hot for each other. Best of all, an uncharacteristically kinky episode is seen not just as kink, but a symptom of an emotional issue. I don't see that very often and I really enjoyed the way Ms. Madison handled it. I'd have given this story all five paws-up except for two things: Parker seems to be very careless about sharing extremely personal, private information via online chat with a person he has apparently never met in person. I have to assume that as a Fed, his communication is coded to infinity and beyond, but I also think the FBI would monitor his laptop, so his openness with her is kind of unlikely. (It is possible that the first book explained this seeming lapse of security.) Also, I had expected the "alien artifact" to be explained within this story, and it is not, which hints that the following books are going to be a major Easter Egg hunt for more of the things. That was actually disappointing, because I had hoped that they would resolve the problem and move on to other cases. I would have wanted to read the next book anyway – and I want to go back and read the first one. 4.5 paws up for Walk a Mile!

Days of Love: Celebrating LGBT History One Story at a Time by Elisa Rolle Published July 2014

This book, a compilation of Elisa Rolle's blog entries over a period of several years, is a work that belongs in every college and university that has a Gender Studies or Queer Studies program. If I were wealthy, I'd order copies for every public library in America. Continued next page 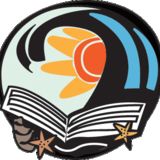 April 2015 edition of The Book Breeze

Reviews, interviews and new releases. Articles on writing and promotion.

April 2015 edition of The Book Breeze

Reviews, interviews and new releases. Articles on writing and promotion.