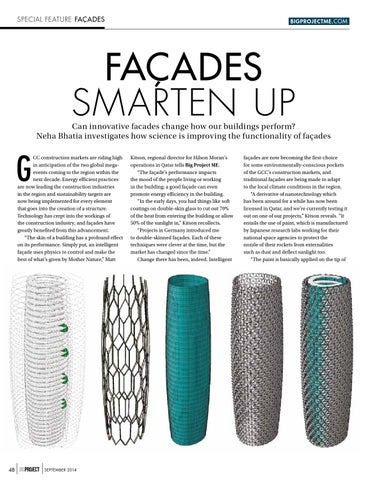 Can innovative facades change how our buildings perform? Neha Bhatia investigates how science is improving the functionality of façades

CC construction markets are riding high in anticipation of the two global megaevents coming to the region within the next decade. Energy efficient practices are now leading the construction industries in the region and sustainability targets are now being implemented for every element that goes into the creation of a structure. Technology has crept into the workings of the construction industry, and façades have greatly benefited from this advancement. “The skin of a building has a profound effect on its performance. Simply put, an intelligent façade uses physics to control and make the best of what’s given by Mother Nature,” Matt

Kitson, regional director for Hilson Moran’s operations in Qatar tells Big Project ME. “The façade’s performance impacts the mood of the people living or working in the building; a good façade can even promote energy efficiency in the building. “In the early days, you had things like soft coatings on double-skin glass to cut out 70% of the heat from entering the building or allow 50% of the sunlight in,” Kitson recollects. “Projects in Germany introduced me to double-skinned façades. Each of these techniques were clever at the time, but the market has changed since the time.” Change there has been, indeed. Intelligent

façades are now becoming the first-choice for some environmentally-conscious pockets of the GCC’s construction markets, and traditional façades are being made to adapt to the local climate conditions in the region. “A derivative of nanotechnology which has been around for a while has now been licensed in Qatar, and we’re currently testing it out on one of our projects,” Kitson reveals. “It entails the use of paint, which is manufactured by Japanese research labs working for their national space agencies to protect the nozzle of their rockets from externalities such as dust and deflect sunlight too. “The paint is basically applied on the tip of