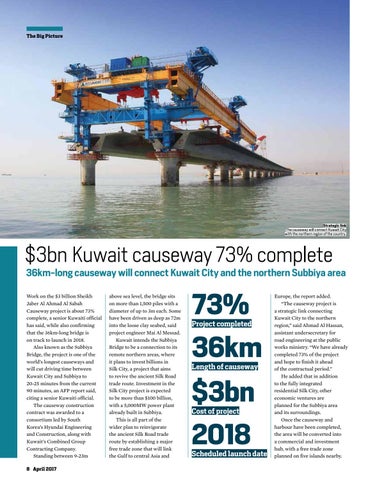 Strategic link The causeway will connect Kuwait City with the northern region of the country.

36km-long causeway will connect Kuwait City and the northern Subbiya area Work on the $3 billion Sheikh Jaber Al Ahmad Al Sabah Causeway project is about 73% complete, a senior Kuwaiti official has said, while also confirming that the 36km-long bridge is on track to launch in 2018. Also known as the Subbiya Bridge, the project is one of the world’s longest causeways and will cut driving time between Kuwait City and Subbiya to 20-25 minutes from the current 90 minutes, an AFP report said, citing a senior Kuwaiti official. The causeway construction contract was awarded to a consortium led by South Korea’s Hyundai Engineering and Construction, along with Kuwait’s Combined Group Contracting Company. Standing between 9-23m 8 April 2017

above sea level, the bridge sits on more than 1,500 piles with a diameter of up to 3m each. Some have been driven as deep as 72m into the loose clay seabed, said project engineer Mai Al Messad. Kuwait intends the Subbiya Bridge to be a connection to its remote northern areas, where it plans to invest billions in Silk City, a project that aims to revive the ancient Silk Road trade route. Investment in the Silk City project is expected to be more than $100 billion, with a 5,000MW power plant already built in Subbiya. This is all part of the wider plan to reinvigorate the ancient Silk Road trade route by establishing a major free trade zone that will link the Gulf to central Asia and

Europe, the report added. “The causeway project is a strategic link connecting Kuwait City to the northern region,” said Ahmad Al Hassan, assistant undersecretary for road engineering at the public works ministry. “We have already completed 73% of the project and hope to finish it ahead of the contractual period.” He added that in addition to the fully integrated residential Silk City, other economic ventures are planned for the Subbiya area and its surroundings. Once the causeway and harbour have been completed, the area will be converted into a commercial and investment hub, with a free trade zone planned on five islands nearby.