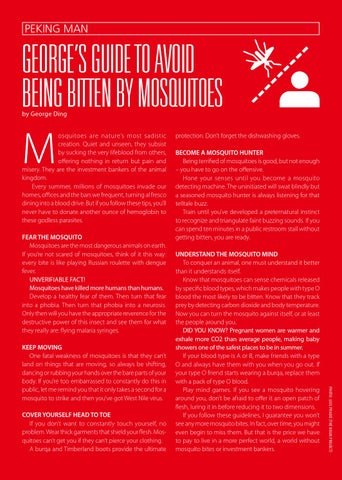 osquitoes are nature’s most sadistic creation. Quiet and unseen, they subsist by sucking the very lifeblood from others, offering nothing in return but pain and misery. They are the investment bankers of the animal kingdom. Every summer, millions of mosquitoes invade our homes, offices and the bars we frequent, turning al fresco dining into a blood drive. But if you follow these tips, you’ll never have to donate another ounce of hemoglobin to these godless parasites. FEAR THE MOSQUITO Mosquitoes are the most dangerous animals on earth. If you’re not scared of mosquitoes, think of it this way: every bite is like playing Russian roulette with dengue fever. UNVERIFIABLE FACT! Mosquitoes have killed more humans than humans. Develop a healthy fear of them. Then turn that fear into a phobia. Then turn that phobia into a neurosis. Only then will you have the appropriate reverence for the destructive power of this insect and see them for what they really are: flying malaria syringes.

COVER YOURSELF HEAD TO TOE If you don’t want to constantly touch yourself, no problem. Wear thick garments that shield your flesh. Mosquitoes can’t get you if they can’t pierce your clothing. A burqa and Timberland boots provide the ultimate

BECOME A MOSQUITO HUNTER Being terrified of mosquitoes is good, but not enough – you have to go on the offensive. Hone your senses until you become a mosquito detecting machine. The uninitiated will swat blindly but a seasoned mosquito hunter is always listening for that telltale buzz. Train until you’ve developed a preternatural instinct to recognize and triangulate faint buzzing sounds. If you can spend ten minutes in a public restroom stall without getting bitten, you are ready. UNDERSTAND THE MOSQUITO MIND To conquer an animal, one must understand it better than it understands itself. Know that mosquitoes can sense chemicals released by specific blood types, which makes people with type O blood the most likely to be bitten. Know that they track prey by detecting carbon dioxide and body temperature. Now you can turn the mosquito against itself, or at least the people around you. DID YOU KNOW? Pregnant women are warmer and exhale more CO2 than average people, making baby showers one of the safest places to be in summer. If your blood type is A or B, make friends with a type O and always have them with you when you go out. If your type O friend starts wearing a burqa, replace them with a pack of type O blood. Play mind games. If you see a mosquito hovering around you, don’t be afraid to offer it an open patch of flesh, luring it in before reducing it to two dimensions. If you follow these guidelines, I guarantee you won’t see any more mosquito bites. In fact, over time, you might even begin to miss them. But that is the price we have to pay to live in a more perfect world, a world without mosquito bites or investment bankers.

KEEP MOVING One fatal weakness of mosquitoes is that they can’t land on things that are moving, so always be shifting, dancing or rubbing your hands over the bare parts of your body. If you’re too embarrassed to constantly do this in public, let me remind you that it only takes a second for a mosquito to strike and then you’ve got West Nile virus.