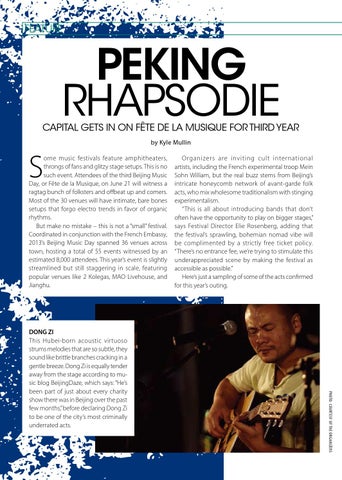 ome music festivals feature amphitheaters, throngs of fans and glitzy stage setups. This is no such event. Attendees of the third Beijing Music Day, or Fête de la Musique, on June 21 will witness a ragtag bunch of folksters and offbeat up and comers. Most of the 30 venues will have intimate, bare bones setups that forgo electro trends in favor of organic rhythms. But make no mistake – this is not a “small” festival. Coordinated in conjunction with the French Embassy, 2013’s Beijing Music Day spanned 36 venues across town, hosting a total of 55 events witnessed by an estimated 8,000 attendees. This year’s event is slightly streamlined but still staggering in scale, featuring popular venues like 2 Kolegas, MAO Livehouse, and Jianghu.

Organizers are inviting cult international artists, including the French experimental troop Mein Sohn William, but the real buzz stems from Beijing’s intricate honeycomb network of avant-garde folk acts, who mix wholesome traditionalism with stinging experimentalism. “This is all about introducing bands that don’t often have the opportunity to play on bigger stages,” says Festival Director Elie Rosenberg, adding that the festival’s sprawling, bohemian nomad vibe will be complimented by a strictly free ticket policy. “There’s no entrance fee, we’re trying to stimulate this underappreciated scene by making the festival as accessible as possible.” Here’s just a sampling of some of the acts confirmed for this year’s outing.

photo: courtesy of the organizers

DONG ZI This Hubei-born acoustic virtuoso strums melodies that are so subtle, they sound like brittle branches cracking in a gentle breeze. Dong Zi is equally tender away from the stage according to music blog BeijingDaze, which says: “He’s been part of just about every charity show there was in Beijing over the past few months,” before declaring Dong Zi to be one of the city’s most criminally underrated acts. 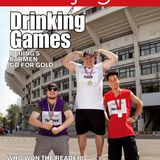