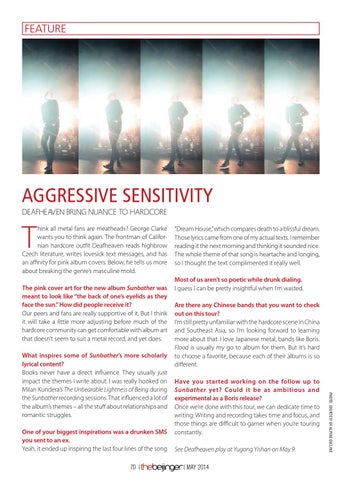 hink all metal fans are meatheads? George Clarke wants you to think again. The frontman of Californian hardcore outfit Deafheaven reads highbrow Czech literature, writes lovesick text messages, and has an affinity for pink album covers. Below, he tells us more about breaking the genre’s masculine mold. The pink cover art for the new album Sunbather was meant to look like “the back of one’s eyelids as they face the sun.” How did people receive it? Our peers and fans are really supportive of it. But I think it will take a little more adjusting before much of the hardcore community can get comfortable with album art that doesn’t seem to suit a metal record, and yet does.

One of your biggest inspirations was a drunken SMS you sent to an ex. Yeah, it ended up inspiring the last four lines of the song

Most of us aren’t so poetic while drunk dialing. I guess I can be pretty insightful when I’m wasted. Are there any Chinese bands that you want to check out on this tour? I’m still pretty unfamiliar with the hardcore scene in China and Southeast Asia, so I’m looking forward to learning more about that. I love Japanese metal, bands like Boris. Flood is usually my go to album for them. But it’s hard to choose a favorite, because each of their albums is so different. Have you started working on the follow up to Sunbather yet? Could it be as ambitious and experimental as a Boris release? Once we’re done with this tour, we can dedicate time to writing. Writing and recording takes time and focus, and those things are difficult to garner when you’re touring constantly. See Deafheaven play at Yugong Yishan on May 9.

What inspires some of Sunbather’s more scholarly lyrical content? Books never have a direct influence. They usually just impact the themes I write about. I was really hooked on Milan Kundera’s The Unbearable Lightness of Being during the Sunbather recording sessions. That influenced a lot of the album’s themes – all the stuff about relationships and romantic struggles.

“Dream House,” which compares death to a blissful dream. Those lyrics came from one of my actual texts. I remember reading it the next morning and thinking it sounded nice. The whole theme of that song is heartache and longing, so I thought the text complimented it really well.