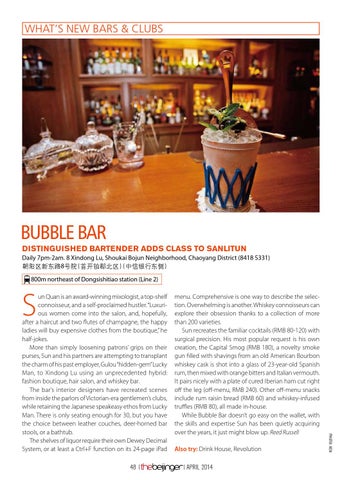 menu. Comprehensive is one way to describe the selection. Overwhelming is another. Whiskey connoisseurs can explore their obsession thanks to a collection of more than 200 varieties. Sun recreates the familiar cocktails (RMB 80-120) with surgical precision. His most popular request is his own creation, the Capital Smog (RMB 180), a novelty smoke gun filled with shavings from an old American Bourbon whiskey cask is shot into a glass of 23-year-old Spanish rum, then mixed with orange bitters and Italian vermouth. It pairs nicely with a plate of cured Iberian ham cut right off the leg (off-menu, RMB 240). Other off-menu snacks include rum raisin bread (RMB 60) and whiskey-infused truffles (RMB 80), all made in-house. While Bubble Bar doesn’t go easy on the wallet, with the skills and expertise Sun has been quietly acquiring over the years, it just might blow up. Reed Russell Also try: Drink House, Revolution

un Quan is an award-winning mixologist, a top-shelf connoisseur, and a self-proclaimed hustler. “Luxurious women come into the salon, and, hopefully, after a haircut and two flutes of champagne, the happy ladies will buy expensive clothes from the boutique,” he half-jokes. More than simply loosening patrons’ grips on their purses, Sun and his partners are attempting to transplant the charm of his past employer, Gulou “hidden-gem” Lucky Man, to Xindong Lu using an unprecedented hybrid: fashion boutique, hair salon, and whiskey bar. The bar’s interior designers have recreated scenes from inside the parlors of Victorian-era gentlemen’s clubs, while retaining the Japanese speakeasy ethos from Lucky Man. There is only seating enough for 30, but you have the choice between leather couches, deer-horned bar stools, or a bathtub. The shelves of liquor require their own Dewey Decimal System, or at least a Ctrl+F function on its 24-page iPad