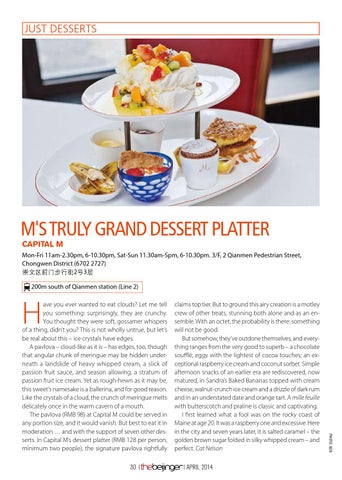 claims top tier. But to ground this airy creation is a motley crew of other treats, stunning both alone and as an ensemble. With an octet, the probability is there: something will not be good. But somehow, they’ve outdone themselves, and everything ranges from the very good to superb – a chocolate soufflé, eggy with the lightest of cocoa touches; an exceptional raspberry ice cream and coconut sorbet. Simple afternoon snacks of an earlier era are rediscovered, now matured, in Sandra’s Baked Bananas topped with cream cheese, walnut-crunch ice cream and a drizzle of dark rum and in an understated date and orange tart. A mille feuille with butterscotch and praline is classic and captivating. I first learned what a fool was on the rocky coast of Maine at age 20. It was a raspberry one and excessive. Here in the city and seven years later, it is salted caramel – the golden brown sugar folded in silky whipped cream – and perfect. Cat Nelson

ave you ever wanted to eat clouds? Let me tell you something: surprisingly, they are crunchy. You thought they were soft, gossamer whispers of a thing, didn’t you? This is not wholly untrue, but let’s be real about this – ice crystals have edges. A pavlova – cloud-like as it is – has edges, too, though that angular chunk of meringue may be hidden underneath a landslide of heavy whipped cream, a slick of passion fruit sauce, and season allowing, a stratum of passion fruit ice cream. Yet as rough-hewn as it may be, this sweet’s namesake is a ballerina, and for good reason. Like the crystals of a cloud, the crunch of meringue melts delicately once in the warm cavern of a mouth. The pavlova (RMB 98) at Capital M could be served in any portion size, and it would vanish. But best to eat it in moderation … and with the support of seven other desserts. In Capital M’s dessert platter (RMB 128 per person, minimum two people), the signature pavlova rightfully