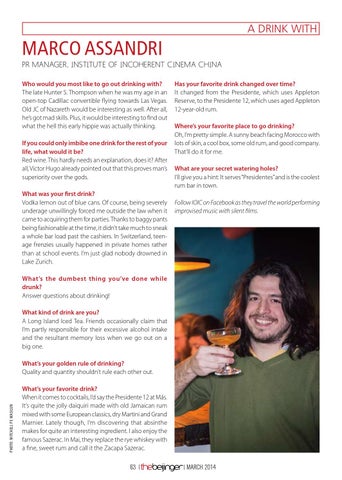 PR MANAGER, INSTITUTE OF INCOHERENT CINEMA CHINA Who would you most like to go out drinking with? The late Hunter S. Thompson when he was my age in an open-top Cadillac convertible flying towards Las Vegas. Old JC of Nazareth would be interesting as well. After all, he’s got mad skills. Plus, it would be interesting to find out what the hell this early hippie was actually thinking. If you could only imbibe one drink for the rest of your life, what would it be? Red wine. This hardly needs an explanation, does it? After all, Victor Hugo already pointed out that this proves man’s superiority over the gods. What was your first drink? Vodka lemon out of blue cans. Of course, being severely underage unwillingly forced me outside the law when it came to acquiring them for parties. Thanks to baggy pants being fashionable at the time, it didn’t take much to sneak a whole bar load past the cashiers. In Switzerland, teenage frenzies usually happened in private homes rather than at school events. I’m just glad nobody drowned in Lake Zurich.

Has your favorite drink changed over time? It changed from the Presidente, which uses Appleton Reserve, to the Presidente 12, which uses aged Appleton 12-year-old rum. Where’s your favorite place to go drinking? Oh, I’m pretty simple. A sunny beach facing Morocco with lots of skin, a cool box, some old rum, and good company. That’ll do it for me. What are your secret watering holes? I’ll give you a hint: It serves “Presidentes” and is the coolest rum bar in town. Follow IOIC on Facebook as they travel the world performing improvised music with silent films.

What’s the dumbest thing you’ve done while drunk? Answer questions about drinking! What kind of drink are you? A Long Island Iced Tea. Friends occasionally claim that I’m partly responsible for their excessive alcohol intake and the resultant memory loss when we go out on a big one. What’s your golden rule of drinking? Quality and quantity shouldn’t rule each other out.   What’s your favorite drink? When it comes to cocktails, I’d say the Presidente 12 at Más. It’s quite the jolly daiquiri made with old Jamaican rum mixed with some European classics, dry Martini and Grand Marnier. Lately though, I’m discovering that absinthe makes for quite an interesting ingredient. I also enjoy the famous Sazerac. In Mai, they replace the rye whiskey with a fine, sweet rum and call it the Zacapa Sazerac.