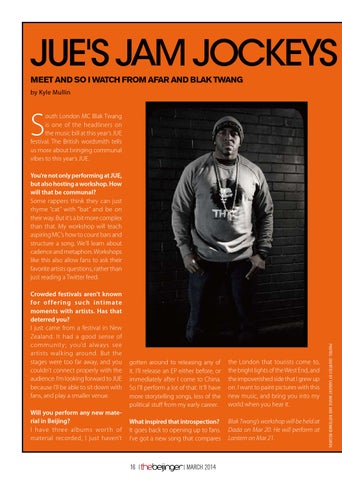 outh London MC Blak Twang is one of the headliners on the music bill at this year’s JUE festival. The British wordsmith tells us more about bringing communal vibes to this year’s JUE. You’re not only performing at JUE, but also hosting a workshop. How will that be communal? Some rappers think they can just rhyme “cat” with “bat” and be on their way. But it’s a bit more complex than that. My workshop will teach aspiring MC’s how to count bars and structure a song. We’ll learn about cadence and metaphors. Workshops like this also allow fans to ask their favorite artists questions, rather than just reading a Twitter feed.

Will you perform any new material in Beijing? I have three albums worth of material recorded, I just haven’t

gotten around to releasing any of it. I’ll release an EP either before, or immediately after I come to China. So I’ll perform a lot of that. It’ll have more storytelling songs, less of the political stuff from my early career.

the London that tourists come to, the bright lights of the West End, and the impoverished side that I grew up on. I want to paint pictures with this new music, and bring you into my world when you hear it.

What inspired that introspection? It goes back to opening up to fans. I’ve got a new song that compares

Blak Twang’s workshop will be held at Dada on Mar 20. He will perform at Lantern on Mar 21.

Crowded festivals aren’t known for offering such intimate moments with artists. Has that deterred you? I just came from a festival in New Zealand. It had a good sense of community ; you’d always see artists walking around. But the stages were too far away, and you couldn’t connect properly with the audience. I’m looking forward to JUE because I’ll be able to sit down with fans, and play a smaller venue.