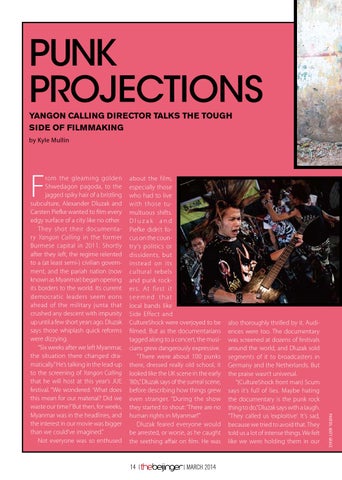 about the film, especially those who had to live with those tumultuous shifts. Dluzak and Piefke didn’t focus on the country’s politics or dissidents, but instead on its cultural rebels and punk rockers. At first it seemed that local bands like Side Effect and CultureShock were overjoyed to be filmed. But as the documentarians tagged along to a concert, the musicians grew dangerously expressive. “There were about 100 punks there, dressed really old school, it looked like the UK scene in the early ’80s,” Dluzak says of the surreal scene, before describing how things grew even stranger. “During the show they started to shout: ‘There are no human rights in Myanmar!’” Dluzak feared everyone would be arrested, or worse, as he caught the seething affair on film. He was

also thoroughly thrilled by it. Audiences were too. The documentary was screened at dozens of festivals around the world, and Dluzak sold segments of it to broadcasters in Germany and the Netherlands. But the praise wasn’t universal. “(CultureShock front man) Scum says it’s full of lies. Maybe hating the documentary is the punk rock thing to do,” Dluzak says with a laugh. “They called us ‘exploitive’. It’s sad, because we tried to avoid that. They told us a lot of intense things. We felt like we were holding them in our

rom the gleaming golden Shwedagon pagoda, to the jagged spiky hair of a bristling subculture, Alexander Dluzak and Carsten Piefke wanted to film every edgy surface of a city like no other. They shot their documentary Yangon Calling in the former Burmese capital in 2011. Shortly after they left, the regime relented to a (at least semi-) civilian government, and the pariah nation (now known as Myanmar) began opening its borders to the world. Its current democratic leaders seem eons ahead of the military junta that crushed any descent with impunity up until a few short years ago. Dluzak says those whiplash quick reforms were dizzying. “Six weeks after we left Myanmar, the situation there changed dramatically.” He’s talking in the lead-up to the screening of Yangon Calling that he will host at this year’s JUE festival. “We wondered: ‘What does this mean for our material? Did we waste our time?’ But then, for weeks, Myanmar was in the headlines, and the interest in our movie was bigger than we could’ve imagined.” Not everyone was so enthused