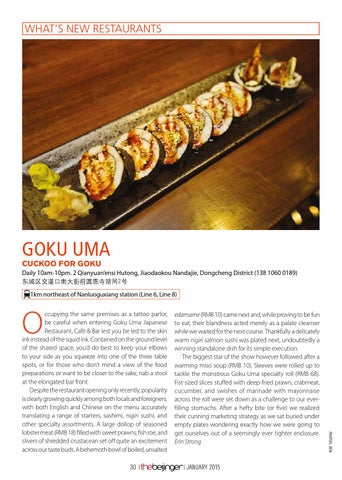 edamame (RMB 10) came next and, while proving to be fun to eat, their blandness acted merely as a palate cleanser while we waited for the next course. Thankfully a delicately warm nigiri salmon sushi was plated next, undoubtedly a winning standalone dish for its simple execution. The biggest star of the show however followed after a warming miso soup (RMB 10). Sleeves were rolled up to tackle the monstrous Goku Uma specialty roll (RMB 68). Fist-sized slices stuffed with deep-fried prawn, crabmeat, cucumber, and swishes of marinade with mayonnaise across the roll were set down as a challenge to our everfilling stomachs. After a hefty bite (or five) we realized their cunning marketing strategy as we sat buried under empty plates wondering exactly how we were going to get ourselves out of a seemingly ever tighter enclosure. Erin Strong

ccupying the same premises as a tattoo parlor, be careful when entering Goku Uma Japanese Restaurant, Café & Bar lest you be led to the skin ink instead of the squid ink. Contained on the ground level of the shared space, you’d do best to keep your elbows to your side as you squeeze into one of the three table spots, or for those who don’t mind a view of the food preparations or want to be closer to the sake, nab a stool at the elongated bar front. Despite the restaurant opening only recently, popularity is clearly growing quickly among both locals and foreigners, with both English and Chinese on the menu accurately translating a range of starters, sashimi, nigiri sushi, and other specialty assortments. A large dollop of seasoned lobster meat (RMB 18) filled with sweet prawns, fish roe, and slivers of shredded crustacean set off quite an excitement across our taste buds. A behemoth bowl of boiled, unsalted

Your Best Beijing Year Ever: Shape Up Your Life

Your Best Beijing Year Ever: Shape Up Your Life