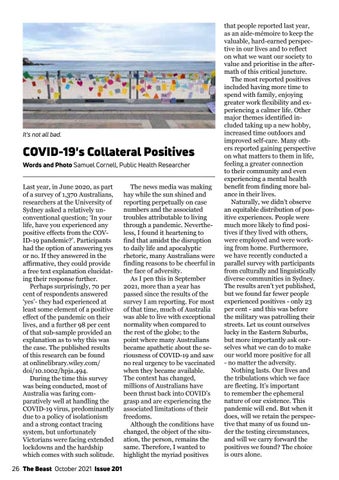 COVID-19&#39;s Collateral Positives Words and Photo Samuel Cornell, Public Health Researcher Last year, in June 2020, as part of a survey of 1,370 Australians, researchers at the University of Sydney asked a relatively unconventional question; ‘In your life, have you experienced any positive effects from the COVID-19 pandemic?’. Participants had the option of answering yes or no. If they answered in the affirmative, they could provide a free text explanation elucidating their response further. Perhaps surprisingly, 70 per cent of respondents answered ‘yes’- they had experienced at least some element of a positive effect of the pandemic on their lives, and a further 98 per cent of that sub-sample provided an explanation as to why this was the case. The published results of this research can be found at onlinelibrary.wiley.com/ doi/10.1002/hpja.494. During the time this survey was being conducted, most of Australia was faring comparatively well at handling the COVID-19 virus, predominantly due to a policy of isolationism and a strong contact tracing system, but unfortunately Victorians were facing extended lockdowns and the hardship which comes with such solitude. 26 The Beast October 2021 Issue 201

The news media was making hay while the sun shined and reporting perpetually on case numbers and the associated troubles attributable to living through a pandemic. Nevertheless, I found it heartening to find that amidst the disruption to daily life and apocalyptic rhetoric, many Australians were finding reasons to be cheerful in the face of adversity. As I pen this in September 2021, more than a year has passed since the results of the survey I am reporting. For most of that time, much of Australia was able to live with exceptional normality when compared to the rest of the globe; to the point where many Australians became apathetic about the seriousness of COVID-19 and saw no real urgency to be vaccinated when they became available. The context has changed, millions of Australians have been thrust back into COVID’s grasp and are experiencing the associated limitations of their freedoms. Although the conditions have changed, the object of the situation, the person, remains the same. Therefore, I wanted to highlight the myriad positives

that people reported last year, as an aide-mémoire to keep the valuable, hard-earned perspective in our lives and to reflect on what we want our society to value and prioritise in the aftermath of this critical juncture. The most reported positives included having more time to spend with family, enjoying greater work flexibility and experiencing a calmer life. Other major themes identified included taking up a new hobby, increased time outdoors and improved self-care. Many others reported gaining perspective on what matters to them in life, feeling a greater connection to their community and even experiencing a mental health benefit from finding more balance in their lives. Naturally, we didn’t observe an equitable distribution of positive experiences. People were much more likely to find positives if they lived with others, were employed and were working from home. Furthermore, we have recently conducted a parallel survey with participants from culturally and linguistically diverse communities in Sydney. The results aren’t yet published, but we found far fewer people experienced positives - only 23 per cent - and this was before the military was patrolling their streets. Let us count ourselves lucky in the Eastern Suburbs, but more importantly ask ourselves what we can do to make our world more positive for all - no matter the adversity. Nothing lasts. Our lives and the tribulations which we face are fleeting. It’s important to remember the ephemeral nature of our existence. This pandemic will end. But when it does, will we retain the perspective that many of us found under the testing circumstances, and will we carry forward the positives we found? The choice is ours alone.

The October 2021 edition of The Beast, with summery cover artwork from Bronte's Anouk.