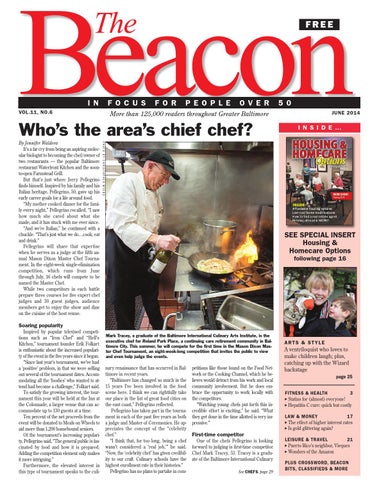 By Jennifer Waldera It’s a far cry from being an aspiring molecular biologist to becoming the chef/owner of two restaurants — the popular Baltimore restaurant Waterfront Kitchen and the soonto-open Farmstead Grill. But that’s just where Jerry Pellegrino finds himself. Inspired by his family and his Italian heritage, Pellegrino, 50, gave up his early career goals for a life around food. “My mother cooked dinner for the family every night,” Pellegrino recalled. “I saw how much she cared about what she made, and it has stuck with me ever since. “And we’re Italian,” he continued with a chuckle. “That’s just what we do…cook, eat and drink.” Pellegrino will share that expertise when he serves as a judge at the fifth annual Mason Dixon Master Chef Tournament. In the eight-week single-elimination competition, which runs from June through July, 16 chefs will compete to be named the Master Chef. While two competitors in each battle prepare three courses for five expert chef judges and 30 guest judges, audience members get to enjoy the show and dine on the cuisine of the host venue.

Soaring popularity Inspired by popular televised competitions such as “Iron Chef” and “Hell’s Kitchen,” tournament founder Erik Folkart is enthusiastic about the increased popularity of the event in the five years since it began. “Since last year’s tournament, we’ve had a ‘positive’ problem, in that we were selling out several of the tournament dates. Accommodating all the ‘foodies’ who wanted to attend had become a challenge,” Folkart said. To satisfy the growing interest, the tournament this year will be held at the Inn at the Colonnade, a larger venue that can accommodate up to 130 guests at a time. Ten percent of the net proceeds from the event will be donated to Meals on Wheels to aid more than 1,200 homebound seniors. Of the tournament’s increasing popularity, Pellegrino said, “The general public is fascinated by food and how it is prepared. Adding the competition element only makes it more intriguing.” Furthermore, the elevated interest in this type of tournament speaks to the culi-

Mark Tracey, a graduate of the Baltimore International Culinary Arts Institute, is the executive chef for Roland Park Place, a continuing care retirement community in Baltimore City. This summer, he will compete for the first time in the Mason Dixon Master Chef Tournament, an eight-week-long competition that invites the public to view and even help judge the events.

nary renaissance that has occurred in Baltimore in recent years. “Baltimore has changed so much in the 15 years I’ve been involved in the food scene here. I think we can rightfully take our place in the list of great food cities on the east coast,” Pellegrino reflected. Pellegrino has taken part in the tournament in each of the past five years as both a judge and Master of Ceremonies. He appreciates the concept of the “celebrity chef.” “I think that, for too long, being a chef wasn’t considered a ‘real job,’” he said. “Now, the ‘celebrity chef’ has given credibility to our craft. Culinary schools have the highest enrollment rate in their histories.” Pellegrino has no plans to partake in com-

petitions like those found on the Food Network or the Cooking Channel, which he believes would detract from his work and local community involvement. But he does embrace the opportunity to work locally with the competitors. “Watching young chefs put forth this incredible effort is exciting,” he said. “What they get done in the time allotted is very impressive.”

A ventriloquist who loves to make children laugh; plus, catching up with the Wizard backstage page 25