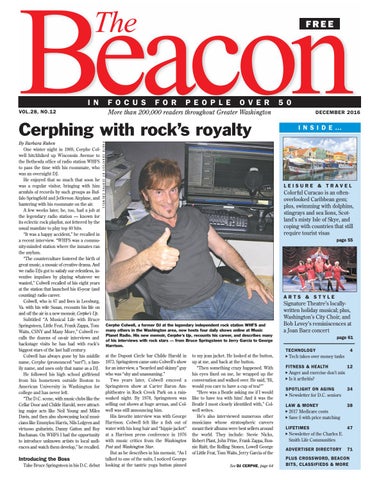 More than 200,000 readers throughout Greater Washington

Introducing the Boss Take Bruce Springsteen in his D.C. debut

By Barbara Ruben One winter night in 1969, Cerphe Colwell hitchhiked up Wisconsin Avenue to the Bethesda office of radio station WHFS to pass the time with his roommate, who was an overnight DJ. He enjoyed that so much that soon he was a regular visitor, bringing with him armfuls of records by such groups as Buffalo Springfield and Jefferson Airplane, and bantering with his roommate on the air. A few weeks later, he, too, had a job at the legendary radio station — known for its eclectic rock playlist, not fettered by the usual mandate to play top 40 hits. “It was a happy accident,” he recalled in a recent interview. “WHFS was a community-minded station where the inmates ran the asylum. “The counterculture fostered the birth of great music, a mosaic of creative drama. And we radio DJs got to satisfy our relentless, inventive impulses by playing whatever we wanted,” Colwell recalled of his eight years at the station that launched his 45-year (and counting) radio career. Colwell, who is 67 and lives in Leesburg, Va. with his wife Susan, recounts his life on and off the air in a new memoir, Cerphe’s Up. Subtitled “A Musical Life with Bruce Springsteen, Little Feat, Frank Zappa, Tom Waits, CSNY and Many More,” Colwell recalls the dozens of on-air interviews and backstage visits he has had with rock’s biggest stars of the last half century. Colwell has always gone by his middle name, Cerphe (pronounced “surf”), a family name, and uses only that name as a DJ. He followed his high school girlfriend from his hometown outside Boston to American University in Washington for college and has never left. “The D.C. scene, with music clubs like the Cellar Door and Childe Harold, were attracting major acts like Neil Young and Miles Davis, and then also showcasing local musicians like Emmylou Harris, Nils Lofgren and virtuoso guitarists, Danny Gatton and Roy Buchanan. On WHFS I had the opportunity to introduce unknown artists to local audiences and watch them develop,” he recalled.

Colorful Curacao is an oftenoverlooked Caribbean gem; plus, swimming with dolphins, stingrays and sea lions, Scotland’s misty Isle of Skye, and coping with countries that still require tourist visas page 55

Cerphe Colwell, a former DJ at the legendary independent rock station WHFS and many others in the Washington area, now hosts four daily shows online at Music Planet Radio. His new memoir, Cerphe’s Up, recounts his career, and describes many of his interviews with rock stars — from Bruce Springsteen to Jerry Garcia to George Harrison.

at the Dupont Circle bar Childe Harold in 1973. Springsteen came onto Colwell’s show for an interview, a “bearded and skinny” guy who was “shy and unassuming.” Two years later, Colwell emceed a Springsteen show at Carter Baron Amphitheatre in Rock Creek Park on a rainsoaked night. By 1978, Springsteen was selling out shows at huge arenas, and Colwell was still announcing him. His favorite interview was with George Harrison. Colwell felt like a fish out of water with his long hair and “hippie jacket” at a Harrison press conference in 1976 with music critics from the Washington Post and Washington Star. But as he describes in his memoir, “As I talked to one of the suits, I noticed George looking at the tantric yoga button pinned

to my jean jacket. He looked at the button, up at me, and back at the button. “Then something crazy happened. With his eyes fixed on me, he wrapped up the conversation and walked over. He said, ‘Hi, would you care to have a cup of tea?’” “Here was a Beatle asking me if I would like to have tea with him! And it was the Beatle I most closely identified with,” Colwell writes. He’s also interviewed numerous other musicians whose stratospheric careers meant their albums were best sellers around the world. They include: Stevie Nicks, Robert Plant, John Prine, Frank Zappa, Bonnie Raitt, the Rolling Stones, Lowell George of Little Feat, Tom Waits, Jerry Garcia of the See DJ CERPHE, page 64