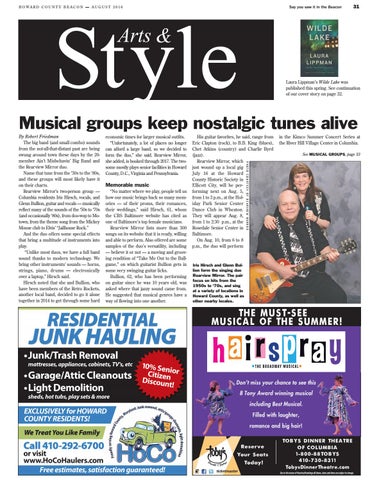 Say you saw it in the Beacon

Laura Lippman’s Wilde Lake was published this spring. See continuation of our cover story on page 32.

Musical groups keep nostalgic tunes alive economic times for larger musical outfits. “Unfortunately, a lot of places no longer can afford a large band, so we decided to form the duo,” she said. Rearview Mirror, she added, is booked through 2017. The twosome mostly plays senior facilities in Howard County, D.C., Virginia and Pennsylvania.

Memorable music “No matter where we play, people tell us how our music brings back so many memories — of their proms, their romances, their weddings,” said Hirsch, 61, whom the CBS Baltimore website has cited as one of Baltimore’s top female musicians. Rearview Mirror lists more than 300 songs on its website that it is ready, willing and able to perform. Also offered are some samples of the duo’s versatility, including — believe it or not — a moving and grooving rendition of “Take Me Out to the Ballgame,” on which guitarist Bullion gets in some very swinging guitar licks. Bullion, 62, who has been performing on guitar since he was 10 years old, was asked where that jazzy sound came from. He suggested that musical genres have a way of flowing into one another.

His guitar favorites, he said, range from Eric Clapton (rock), to B.B. King (blues), Chet Atkins (country) and Charlie Byrd (jazz). Rearview Mirror, which just wound up a local gig July 16 at the Howard County Historic Society in Ellicott City, will be performing next on Aug. 5, from 1 to 3 p.m., at the Holiday Park Senior Center Dance Club in Wheaton. They will appear Aug. 8, from 1 to 2:30 p.m., at the Rosedale Senior Center in Baltimore. On Aug. 10, from 6 to 8 p.m., the duo will perform

By Robert Friedman The big band (and small combo) sounds from the not-all-that-distant past are being swung around town these days by the 20member Ain’t Misbehavin’ Big Band and the Rearview Mirror duo. Name that tune from the ‘30s to the ‘80s, and these groups will most likely have it on their charts. Rearview Mirror’s two-person group — Columbia residents Iris Hirsch, vocals, and Glenn Bullion, guitar and vocals — musically reflect many of the sounds of the ‘50s to ‘70s (and occasionally ‘80s), from doo-wop to Motown, from the theme song from the Mickey Mouse club to Elvis’ “Jailhouse Rock.” And the duo offers some special effects that bring a multitude of instruments into play. “Unlike most duos, we have a full band sound thanks to modern technology. We bring other instruments’ sounds — horns, strings, piano, drums — electronically over a laptop,” Hirsch said. Hirsch noted that she and Bullion, who have been members of the Retro Rockets, another local band, decided to go it alone together in 2014 to get through some hard

Iris Hirsch and Glenn Bullion form the singing duo Rearview Mirror. The pair focus on hits from the 1950s to ‘70s, and sing at a variety of locations in Howard County, as well as other nearby locales.

THE MUST - SEE MUSICAL OF THE SUMMER!

TOBY• S DINNER THEATRE OF COLUMBIA 1-800-88TOBYS 410-730-8311 TobysDinnerTheatre.com Due to the nature of theatrical bookings all shows, dates and times are subject to change.