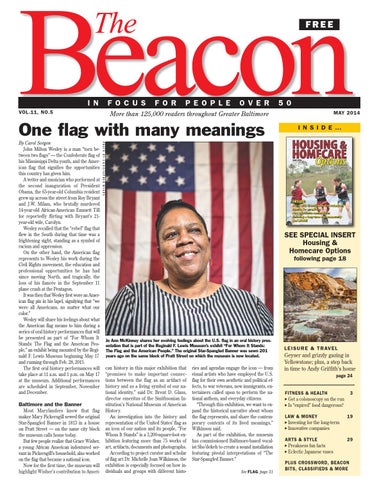 Most Marylanders know that flag maker Mary Pickersgill sewed the original Star-Spangled Banner in 1813 in a house on Pratt Street — on the same city block the museum calls home today. But few people realize that Grace Wisher, a young African American indentured servant in Pickersgill’s household, also worked on the flag that became a national icon. Now for the first time, the museum will highlight Wisher’s contribution to Ameri-

Baltimore and the Banner

One flag with many meanings By Carol Sorgen John Milton Wesley is a man “torn between two flags” — the Confederate flag of his Mississippi Delta youth, and the American flag that signifies the opportunities this country has given him. A writer and musician who performed at the second inauguration of President Obama, the 65-year-old Columbia resident grew up across the street from Roy Bryant and J.W. Milam, who brutally murdered 14-year-old African-American Emmett Till for reportedly flirting with Bryant’s 21year-old wife, Carolyn. Wesley recalled that the “rebel” flag that flew in the South during that time was a frightening sight, standing as a symbol of racism and oppression. On the other hand, the American flag represents to Wesley his work during the Civil Rights movement, the education and professional opportunities he has had since moving North, and tragically, the loss of his fiancée in the September 11 plane crash at the Pentagon. It was then that Wesley first wore an American flag pin in his lapel, signifying that “we were all Americans, no matter what our color.” Wesley will share his feelings about what the American flag means to him during a series of oral history performances that will be presented as part of “For Whom It Stands: The Flag and the American People,” an exhibit being mounted by the Reginald F. Lewis Museum beginning May 17 and running through Feb. 28, 2015. The first oral history performances will take place at 11 a.m. and 1 p.m. on May 17 at the museum. Additional performances are scheduled in September, November and December.

Jo Ann McKinney shares her evolving feelings about the U.S. flag in an oral history presentation that is part of the Reginald F. Lewis Museum’s exhibit “For Whom It Stands: The Flag and the American People.” The original Star-Spangled Banner was sewn 201 years ago on the same block of Pratt Street on which the museum is now located.

can history in this major exhibition that “promises to make important connections between the flag as an artifact of history and as a living symbol of our national identity,” said Dr. Brent D. Glass, director emeritus of the Smithsonian Institution’s National Museum of American History. An investigation into the history and representation of the United States’ flag as an icon of our nation and its people, “For Whom It Stands” is a 3,200-square-foot exhibition featuring more than 75 works of art, artifacts, documents and photographs. According to project curator and scholar of flag art Dr. Michelle Joan Wilkinson, the exhibition is especially focused on how individuals and groups with different histo-

ries and agendas engage the icon — from visual artists who have employed the U.S. flag for their own aesthetic and political effects, to war veterans, new immigrants, entertainers called upon to perform the national anthem, and everyday citizens. “Through this exhibition, we want to expand the historical narrative about whom the flag represents, and share the contemporary contexts of its lived meanings,” Wilkinson said. As part of the exhibition, the museum has commissioned Baltimore-based vocalist Sho’dekeh to create a sound installation featuring pivotal interpretations of “The Star-Spangled Banner.” See FLAG, page 31

Geyser and grizzly gazing in Yellowstone; plus, a step back in time to Andy Griffith’s home page 24

FITNESS & HEALTH k Get a colonoscopy on the run k Is “expired” food dangerous?