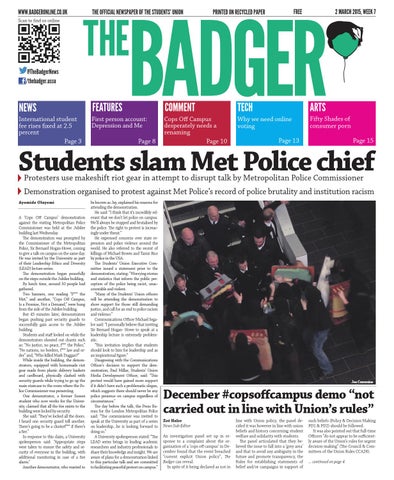 www.badgeronline.co.uk Scan to find us online

THE OFFICIAL NEWSPAPER OF THE STUDENTS’ UNION

Why we need online voting

Demonstration organised to protest against Met Police’s record of police brutality and institution racism Ayomide Oluyemi A ‘Cops Off Campus’ demonstration against the visiting Metropolitan Police Commissioner was held at the Jubilee building last Wednesday. The demonstration was prompted by the Commissioner of the Metropolitan Police, Sir Bernard Hogan-Howe, coming to give a talk on campus on the same day. He was invited by the University as part of their Leadership Ethics and Diversity (LEAD) lecture series. The demonstration began peacefully on the steps outside the Jubilee building. By lunch time, around 50 people had gathered. Two banners, one reading “F*** the Met,” and another, “Cops Off Campus, Is a Promise, Not a Demand,” were hung from the side of the Jubilee building. But 45 minutes later, demonstrators began pushing past security guards to successfully gain access to the Jubilee building. Students and staff looked on while the demonstrators shouted out chants such as: “No justice, no peace, f*** the Police,” “No nations, no borders, f*** law and order” and, “Who killed Mark Duggan?” While inside the building, the demonstrators, equipped with homemade riot gear made from plastic delivery baskets and cardboard, physically clashed with security guards while trying to go up the main staircase to the room where the Police Commissioner was presenting. One demonstrator, a former Sussex student who now works for the University, claimed that all the fire exists to the building were locked by security. She said: “They’ve locked all the doors. I heard one security guard tell another. There’s going to be a clusterf*** if there’s a fire.” In response to this claim, a University spokesperson said: “Appropriate steps were taken to ensure the safety and security of everyone in the building, with additional monitoring in case of a fire alarm.” Another demonstrator, who wanted to

be known as Jay, explained his reasons for attending the demonstration. He said: “I think that it’s incredibly relevant that we don’t let police on campus. We’ll always be stopped and brutalised by the police. The right to protest is increasingly under threat.” He expressed concerns over state repression and police violence around the world. He also referred to the recent of killings of Michael Brown and Tamir Rice by police in the USA. The Students’ Union Executive Committee issued a statement prior to the demonstration, stating: “Worrying stories and statistics that inform the public perception of the police being racist, unaccountable and violent. “Many of the Students’ Union officers will be attending the demonstration to show support for those still demanding justice, and call for an end to police racism and violence.” Communications Officer Michael Segalov said: “I personally believe that inviting Sir Bernard Hogan- Howe to speak at a leadership lecture is extremely problematic. “This invitation implies that students should look to him for leadership and as an inspirational figure.” Disagreeing with the Communications Officer’s decision to support the demonstration, Paul Millar, Students’ Union Media Development Officer, said: “This protest would have gained more support if it didn’t have such a problematic slogan, which suggests there should never be any police presence on campus regardless of circumstances.” The day before the talk, the Press Bureau for the London Metropolitan Police said: “The commissioner was invited to speak at the University as part of a series on leadership…he is looking forward to doing so.” A University spokesperson stated: “The LEAD series brings in leading academic researchers and industry professionals to share their knowledge and insight. We are aware of plans for a demonstration linked to this particular talk and are committed to facilitating peaceful protest on campus.”

December #copsoffcampus demo “not carried out in line with Union’s rules” Zoë Halse News Sub-Editor An investigation panel set up in response to a complaint about the organisation of a ‘cops off campus’ in December found that the event breached “current explicit Union policy”, The Badger can reveal. In spite of it being declared as not in

line with Union policy, the panel decided it was however in line with union beliefs and history concerning student welfare and solidarity with students. The panel articulated that they believed the issue to fall into a ‘grey area’ and that to avoid any ambiguity in the future and promote transparency, the Rules for establishing statements of belief and/or campaigns in support of

such beliefs (Policy &amp; Decision Making PD1 &amp; PD2) should be followed. It was also pointed out that full-time Officers “do not appear to be sufficiently aware of the Union’s rules for urgent decision-making” (The Council &amp; Committees of the Union Rules CCA28). ... continued on page 4 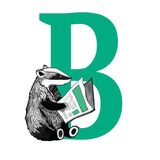