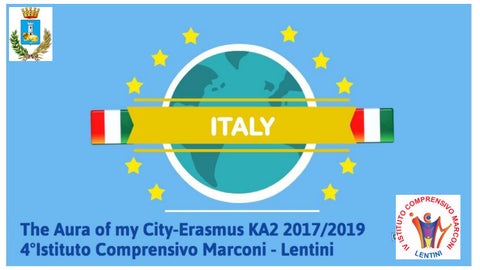 Italy is located in southern Europe. It sticks out in the Mediterranean sea like a boot. It's a democratic republic governed by a President and a Prime Minister, Italy covers an area of 301,338km2 and has a largely temperate Mediterranean climate. With around 61 million inhabitants it is the forth most populous EU member state

The official language is Italian and in some small areas German, Slovenian or French. There are a lot of different dialects spoken in Italy. They vary between regions and, in some cases, also between provinces.

Northern Italy is separated from France, Switzerland and Austria by The Alps, a chain of mountains. Monte Bianco, in English White Mountain is the highest mountain in western Europe, it belongs to this chain. The second important chain of mountains in Italy is The Apenines, Appennini in Italian, which are in central and southern Italy

The Po River is the longest river in Italy. It flows through some cities like: Milano Torino, Piacenza, Cremona and Rovigo.

Northern Italy has some of the biggest lakes in the country: Lake Garda, Lake Como, Lake Maggiore and Lake Iseo.

surrounded by part of northern Italy

S.P.Q.R The capital of Italy is Rome, famous for The Colosseum, built in 70-80 AD. It is considered one of the greatest works of architecture and engineering of ancient time.

There are also other important cities like Milano, Venezia, Firenze and Napoli that, for their cultural, historical and artistic heritage bring tourists from all over the world .

Some of the most important writers and poets are: Dante Alighieri, Ugo Foscolo, Alessandro Manzoni, Giacomo Leopardi, Gabriele Dâ&#x20AC;&#x2122;Annunzio and Pirandello.

Some of the most important painters and sculptors are Raffaello, Michelangelo Leonardo, Caravaggio, Modigliani and Guttuso.

Italy is home to more World Heritage Sites than any other nation in the world. These sites are culturally important and valued according to UNESCO. About 60% of the works of art of the world are in Italy.

Sicily with its treasures of historical, cultural and natural importance, boasts 7 sites listed in the Worl Heritage List. Archeological Area of Agrigento

Arab-Norman Palermo and the Cathedral of CefalĂš and Monreale

Sicily is surrounded by three different seas: the Tyrrhenian Sea, the Mediterranean Sea and the Ionian Sea, so it was a strategic point of interest for many civilisations in both Europe and Northern Africa.

BUT WHERE DOES THIS SYMBOL COME FROM?

â&#x20AC;˘ Trinacria was an ancient oriental religious symbol that represented the Sun God in his triple form of spring, summer and winter. â&#x20AC;˘ In Greek mythology Trinacria was represented by a female head with three legs. The head clearly refers to The Gorgons, monsters with golden wings, claws and snakes instead of hair. Thanks to the Greeks who marked their coins with trinacria, the symbol spread throrought Sicily.

With the Romans the Trinacria loses its mystic meaning and becomes the geographic symbol of Sicily. In fact the three legs refer to the triangle shape of the island. At that time in Palermo the gorgone with three legs appears on the coins. Now, for Sicilian people, the Trinacria is a lucky charm talisman just like red horns.

SICILIAN CARTS The carts were introduced to the island by the ancient Greeks. Originally used to transport goods, now they only appear in museum or in particular folkoristc events. The Sicilian Cart is made in several provinces in Sicily each with their own style The craft of making the carts is handed down from generation to generation.

Carts are completely covered in carvings and brightly geometrical designs and painted scenes of Sicilian folklore and history. In fact, in the past these scenes were a good means of historical information for those who were illiterate. The main colors are the same ones of the Sicilian flag: yellow and red, with details in bright blue and green. The animals pulling the carts are often adorned as well.

Sicily, land of sea, history, traditions and even music. The Sicilian folk instruments represent an essential component in the performance of popular music as well as a historical, magical-ritual and socio-cultural value. Among the most played Sicilian instruments we find the marranzano, the tamburello, the friscalettu and the quartara.

• The marranzano is an ancient musical instrument, made of a metal support in the shape of a horseshoe to which a steel sheet is fixed. The instrument was formerly used as a signal between the shepherds and in the mafia. • The tambourine, also called tammureddu, is a percussion instrument that was used in magical and ritual rites in some areas of Sicily. • The friscalettu or cane flute is a wind instrument of Greek origin built in Mediterranean cane; in the post-war period it was used in the many Sicilian folkloristic bands. • The quartara is a terracotta container, with peasant origins, which is used as a musical instrument in popular festivals: blowing in the vase emits a dark sound.

Archeological museum of Lentini Lentini Regional Archeological Museum is a museum dedicated to Leontinoi findings.The museum illustrates the archaeological history of Lentini and its territory from prehistory to the Middle Ages, through the display of materials from the ancient city and the main archaeological sites of the area.

Today Lentini provides many cultural attractions such as the Mother Church of Santa Maria la Cava and Santâ&#x20AC;&#x2122;Alfioâ&#x20AC;&#x2122;s, rebuilt in 1693 in the typical Baroque style, after catastrophic earthquake. It is full of paintings and works of art.

You can also visit… •The Old Castle Ruins. They are the ruins of an old medieval castle, very important for the people from Lentini. “Castellaccio” is the name used by people living in Lentini to refer to the Federician Castle or Castrum Vetus. It was built by Emperor Frederick II of Swabia under the supervision of the architect Riccardo da Lentini. There is a big room under the castle ruins but we don’t know if it was a prison, an armery or a little church.

The Convent of Friars Minor Capuchin , an old convent recently restructured. In it there is the story of friars life with their secrets and daily routine, like the window used by friars to hear mass, the “putridaria” chairs, the common rooms, the cells, the refectory with its “smoky” paintings, the kitchen and the well which gathered rainwaters

In Italy there are different types of upper school: Liceo scientifico, where the most important subjects are Math and Science. Liceo classico a kind of humanistic school where you can study Old Greek and Latin, too Liceo linguistico focusing on the study of Foreign Languages. Liceo artistico based on arts, designs, sculpture. There are also Technical and Professional Institute. Alberghiero dedicated to hotel and restaurant services Agrario where you can study to become agricultural expert Tecnico Industriale where the most important subjects are Chemistry and Mechanics. Tecnico Commerciale to study Economics Tecnico Geometra to become a quantity surveyor

The 4 th Istituto Comprensivo “Guglielmo Marconi” is in our town, Lentini, the city of oranges, and it is our school. It’s a comprehensive school that includes different grades : • • •

Lower secondary school is ours and we call it Middle school. We have a short week, in fact we have 6 classes a day from Monday to Friday and so we are free on Saturday.

to speak and meet with the

Our school is engaged in many activities promoting global citizenship and forming responsible and aware citizens. The expected activities are: -Theater -Cineforum -Sport games

It is a project of reading for the three school degrees, meeting the writers of the books that students read.

to communicate, collaborate, develop and share projects in EU

Annual project celebrating the Another series of education European Day with activities of initiatives concerns the promotion of European citizenship now in its fourth a correct way of life with particular edition attention to food.

It is a project that wants to develop a positive approach to Math , doing competitions among students of many schools.

And finally last but not the least our 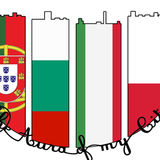