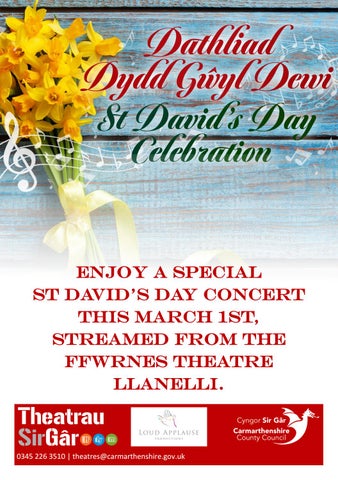 Welcome Carmarthenshire Theatres have partnered with Loud Applause Productions to produce a celebratory St David’s Day concert featuring a wealth of Welsh talent. Join us for an evening of song, laughter and literature as we celebrate this special day in the Welsh calendar.

Anthem - from the musical Chess

Bring Him Home - from the musical Les Misérables

Our presenter for the evening

Alun Gibbard After a successful career in broadcasting with BBC Wales, ITV Wales and S4C, Alun decided to pursue a career in writing and has since then published 35 books. Two of his books have been shortlisted for the British Sports Book Awards. He has also been Chair of Judges for the Welsh Book of the Year.

Including performances from… Samuel Wyn-Morris Our first soloist for the evening will be the talented Samuel Wyn-Morris, a former Ysgol Gyfun Y Strade student and graduate of the Guildford School of Music where he gained a FirstClass Honours Degree in Musical Theatre.

An accomplished musical theatre actor, Samuel Wyn-Morris is forging a successful career on the West End stage where he’s appeared most recently in the musical Les Misèrables in the role of Feuilly. Samuel is also a previous winner of the Carmarthenshire Celebration of Culture Award in Excellence in Music Category, which is held annually at the Ffwrnes Theatre.

Alis Huws Joining us on the harp for our digital St David’s Day concert will be the newly appointed Official Harpist to HRH The Prince of Wales, Alis Huws. This multi-award-winning harpist holds a master’s degree from the Royal Welsh College of Music and Drama and has travelled the globe preforming at high profile events and competitions.

Alis has performed for the Royal family on numerous occasions including at Buckingham Palace to mark 50 years since the investiture of HRH The Prince of Wales, as well as joining Katherine Jenkins and Only Men Aloud in a performance celebrating the UEFA Champions League Final in Cardiff.

Julian Lewis Jones Our guest speaker for the evening will be Welsh actor Julian Lewis Jones. Originally from Anglesey, but now based in Nantgaredig just outside Carmarthen. Julian is a familiar face to many having appeared in a string of successful TV and film roles including the hit Sky ONE series penned and starring Ruth Jones, Stella, where he plays Krazy Karl.

Julian has also appeared in numerous TV dramas including The Tudors, Spooks, and Ambassadors and also Hollywood movies such as Clint Eastwood's film Invictus and Zero Dark Thirty. Acting isn’t the only passion in Julian’s life, fishing is also up there! Fellow fishing fans may have seen Julian in the popular S4C series, Sgoto, which he presents.

Osian Clarke A former pupil of Ysgol Dyffryn Aman, Osian Clarke is currently in his second year at the Royal Academy of Music in London, where he is studying for a degree in Vocal Performance and Opera Studies. This ambitious young man who is one of the Loud Applause Rising Stars and is firmly on track to realising his dream of becoming a professional singer.

Osian has performed as part of an ensemble and as a soloist in numerous concerts throughout the UK and internationally. He’s also appeared on television, performing on S4C’s Heno and Noson Lawen programmes. Osian also has many accolades to his name, winning ‘The Betty Richards Prize’, a major competition at the Royal Welsh College of Music in Cardiff, and also a Carmarthenshire Celebration of Culture Award in the category of ‘Excellence in Music’ in recent years.

Lauren Fisher Lauren Fisher, a previous winner of the Rotary Young Musicians and a Loud Applause Rising Star, is one of our young talents performing at our first digital St David’s Day concert.

Currently studying for her 'A' Levels at Ysgol Gyfun Y Strade, this talented singer has built up an impressive CV having performed at many prestigious concerts including events at our very own Ffwrnes Theatre also Stradey Castle, Machynys Golf Club, Llanelly House, Margam Orangery and All Saints’ Church in Oystermouth as well as singing live on S4C's Heno programme.

Book via Carmarthenshire Theatre’s website at www.theatrausirgar.co.uk The concert will be available to watch from Monday March 1st 7pm until March 15th. During this period, you can watch the link at any time or on any date that suits you from your smart-TV, tablet or laptop.

Subtitles and closed captions are available in both English and Welsh. Click the ‘CC’ icon in the bottom right corner of the video to turn on captions for the concert. Join Carmarthenshire Theatres for a special St David’s Day Celebration, filmed live at the Ffwrnes Theatre in Llanelli, and streamed to audi...

Join Carmarthenshire Theatres for a special St David’s Day Celebration, filmed live at the Ffwrnes Theatre in Llanelli, and streamed to audi...